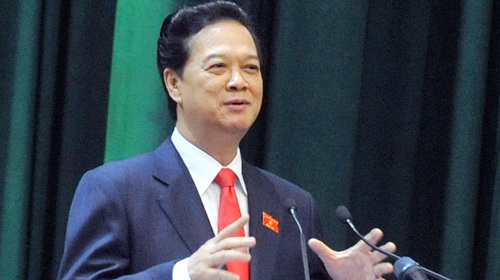 Nations having sovereignty in the East Vietnam Sea and members of the Association of Southeast Asian Nations (ASEAN) should unite in fighting against China’s violation of international law and other countries’ territorial integrity, Vietnamese Prime Minister Nguyen Tan Dung said on Wednesday.

>> Vietnam preparing documents to sue China: premier>> Vietnam never yields to force: State President>> Vietnam should prepare for all scenarios in China oil spat: Party chief>> Vietnam premier urges greater efforts to protect national sovereignty The premier issued this call at his meeting in Hanoi with Philippine Secretary of Foreign Affairs Albert F. del Rosario, who is on a visit to Vietnam at the invitation of Vietnamese Deputy Prime Minister and Foreign Minister Pham Binh Minh.

At the meeting, the Philippine Secretary said China’s illegal placement of the Haiyang Shiyou 981 oil rig in Vietnam’s waters since May 1 as well as its use of force against Vietnamese law enforcement officers and fishermen have seriously infringed on international law, including the 1982 United Nations Convention on the Law of the Sea (UNCLOS) and the Declaration on the Conduct of Parties in the East Vietnam Sea (DOC).

These acts aim to realize the “nine-dash line” illegally created by China to claim sovereignty over most of the East Vietnam Sea, he said.

The top Philippine diplomat also emphasized that China’s aggressive and inhumane actions in the East Vietnam Sea are worsening the situation of the sea area day after day.

Sharing the same view as the guest, PM Dung stressed that nations exercising sovereignty in the East Vietnam Sea and ASEAN countries have no other way than to unite in the fight against China’s infringement of international law and other countries’ territorial integrity.

Such absurd Chinese moves should even be brought to international tribunals for settlement, he added.     Regarding the relation between Vietnam and the Philippines, the Vietnamese government leader urged the two sides to take more efforts to lift bilateral ties to a strategic partnership.

The host and guest then discussed measures to consolidate and deepen bilateral cooperation, particularly in politics, economics, security, defense, agriculture, fisheries, and education.