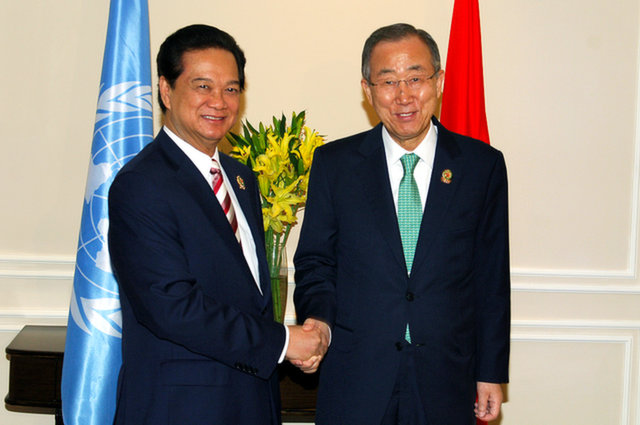 >> Vietnam, China agree to avoid armed conflicts in East Sea The Vietnamese leader made the statement when speaking at the 25th ASEAN Summit in Nay Pyi Taw on November 12. PM Dung also requested that the parties concerned in the East Sea promptly formulate the Code of Conduct in the East Sea (COC).

Agreeing with his appeal, the event’s participants highlighted the maintenance of regional peace, security and stability while ensuring the security, safety, and freedom of aviation and maritime activities in the sea area. ASEAN leaders also requested that any disputes in the East Sea must be settled through peaceful measures. They also called on all parties to constrain themselves, avoid further complicating the East Sea situation or expanding or increasing tension in the area. They also called for boosting the negotiation between ASEAN and China to reach a COC soon.

According to a press release of the Vietnamese Ministry of Foreign Affairs, PM Dung frankly reported to the summit about the current East Sea situation. He said the situation remained complicated, with many activities having been carried out on many islands and underground reefs in the East Sea, causing changes to the status quo. Such acts run against the DOC, he stressed, calling for ASEAN countries to take more responsibilities in maintaining peace, security and stability in the East Sea. He also asked ASEAN and China to boost their talks to make the COC available soon. In talking with Tuoi Tre, Prof. Carl Thayer, from the Australian Defense Academy, commented that ASEAN and China have yet to reach any practical progress in their negotiations on the implementation of DOC and in the building of COC. Their negotiations have taken place at a very slow pace, the professor said.

In the joint statement of the ASEAN Summit, all the leaders of the bloc’s member countries expressed their deep worry about the recent situation in the East Sea.

The bloc emphasized the importance of maintaining peace, stability, security, maritime and air safety and freedom in the East Sea, and the compliance with international law including the United Nations Convention on the Law of the Sea.