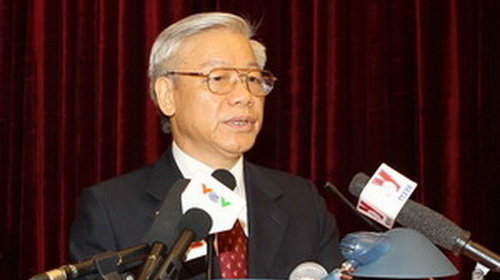 Vietnam and China should exchange views sincerely to settle the differences between them satisfactorily for mutual interest, Vietnamese Party General Secretary Nguyen Phu Trong has said.

>> Vietnam dismisses China’s sovereignty claim in East Sea The Party leader made the statement at his Friday meeting with visiting Chairman of the National Committee of the Chinese People’s Political Consultative Conference Yu Zhengsheng who arrived in Hanoi on Thursday for a three-day visit, according to the Vietnam News Agency. General Secretary Trong said that the two sides should boost positive and sincere negotiations for the satisfactory settlement of sea-related issues. The Vietnamese party chief stressed the importance of enhancing political trust, increasing delegation exchanges, and stepping up coordination between the two Parties for the interest of both countries and peoples. He affirmed the Vietnamese leaders and people’s consistent respect for the two countries’ neighborliness, long-standing friendship, and comprehensive strategic partnership.

Yu Zhengsheng confirmed that the Chinese Party, State, and people always highly value the comprehensive cooperation and traditional friendship with Vietnam and will do their utmost to expand and deepen the bilateral ties. China is ready to step up cooperation in various areas with Vietnam, including politics, trade, culture, education, science, and technology, he said.

The Chinese guest also expressed his wish that the two countries will enhance political trust and work together to resolve differences in a satisfactory manner.

On the same day, Prime Minister Nguyen Tan Dung gave a reception for the Chinese official, during which he asserted that the long-standing traditional friendship between Vietnam and China is a valuable asset of both nations.

The Vietnamese Party, Government, and people always wish to further develop the friendship and comprehensive strategic cooperation between the two countries, for the sake of peace, stability, and prosperity in the region and the world, PM Dung said. He also noted that despite numerous difficulties and challenges over the past time, both sides have gradually restored and stabilized their relations.

As regards maritime issues, he urged both sides to put the current situation under control and avoid causing new complicated problems that may harm their bilateral relationship.

PM Dung also underlined the need to beef up sea-related negotiations, particularly forming a group working on the waters off the mouth of the Tonkin Gulf.

Border and territorial disputes between the two nations should be solved in the spirit of sincere cooperation, frank negotiation, and mutual respect, he said.

In reply, Yu agreed to boost practical cooperation in all fields and take joint efforts to stabilize the maritime developments.