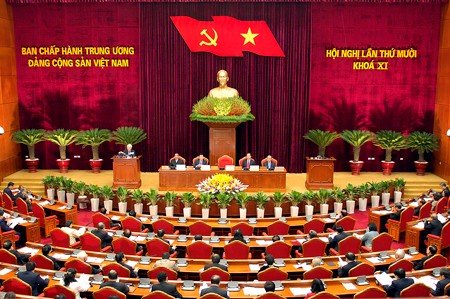 Reviewing the performance of the Party Central Committee’s Politburo and Secretariat, introducing high-ranking candidates to the Party, and conducting a confidence vote on top Party officials are included in the agenda of the Party Central Committee’s 10th session that opened in Hanoi on Monday. During the eight-day session, which is chaired by Communist Party of Vietnam’s General Secretary Nguyen Phu Trong, the Committee will discuss and approve draft documents to be submitted to the 12th National Party Congress for consideration and approval, according to the Vietnam News Agency. These documents will then be sent to Party congresses at all levels for further opinions and comments. A number of reports and projects will also be tabled for recommendations before they are submitted to the Politburo. The session’s participants will introduce candidates to the Party’s strategic personnel plan that will review and supplement personnel for the Central Committee’s Politburo and Secretariat. The session will also conduct a vote of confidence on members of the Politburo and Secretariat, elect additional members for the Central Committee’s Inspection Commission, and handle complaints on violations of Party rules and some other important issues. Addressing the opening ceremony yesterday, Party leader Nguyen Phu Trong stressed the session’s importance in the implementation of the Party’s tasks set for 2015 and for the whole tenure. The session will also lay foundations for successfully organizing Party congresses at all levels in the run-up to the 12th National Party Congress, he said. Meanwhile, Prime Minister Nguyen Tan Dung, a member of the Politburo, presented to the meeting a report on the country’s social and economic performance during the 2011-2015 period and the orientations and tasks set for the 2016-2020 period. The session is slated to close on January 12.