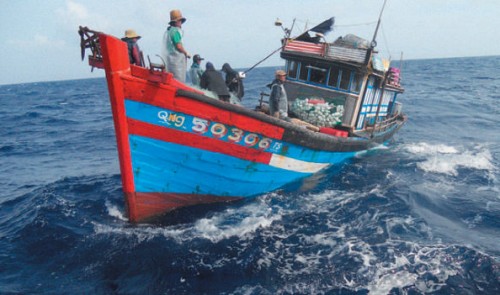 An international seminar focusing on making use of international law to resolve maritime disputes was opened in Hanoi on Monday, attended by many law experts from Vietnam and other countries.     The two-day event is jointly held by Hanoi Law University and Germany’s Friedrich-Ebert-Stiftung Academic Foundation (FES). It is centered on solving disputes at sea in line with international law and the 1982 United Nations Convention on the Law of the Sea. The function serves as a forum for its participants, who are law professors from Vietnam and many other countries, including Germany, Japan, Indonesia, and the Philippines, to share their experience in and knowledge of making the best use of international law, including the UNCLOS, in settling disputes in the East Vietnam Sea. The first day of the seminar has passed with six reports presented, focusing on a common mechanism for resolving sea rifts and dispute settlement at international jurisdiction institutions and international organizations. In his report, Professor Alexander Proelss, from the Law Faculty of Germany’s University of Trier, mentioned the illegal cow’s tongue line (also called the nine-dash line), with which Beijing illicitly claims sovereignty over most of the East Vietnam Sea, including Vietnam’s Truong Sa (Spratly) and Hoang Sa (Paracel) archipelagoes. Prof. Proelss said that this cow’s tongue line is not clear as many people are still arguing over how to understand it. In a related development, Indonesian President Joko Widodo on Monday rejected China’s nine-dash line, saying it is not based on a legal foundation under international law, Reuters reported the same day. The Indonesian leader made the statement in an interview with a major Japanese newspaper as he embarked on a visit to Japan and China, Reuters said, adding that it was the first time he had taken a position on the issue since coming to power in October. Widodo said Jakarta supports a code of conduct for the East Vietnam Sea and also dialogue between China and Japan, China and the Association of Southeast Asian Nations, Reuters said. However, he said his administration wants to remain an "honest broker" in one of Asia's thorniest territorial disputes, according to Reuters.