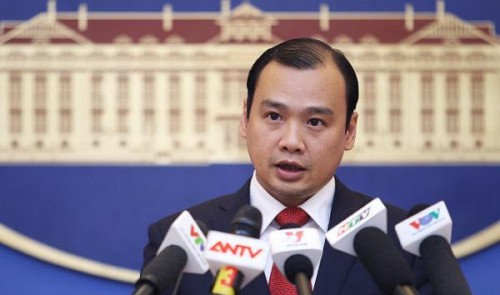 Vietnamese and Cambodian officials on Friday joined hands to identify the cause of a recent violence caused by Cambodian extremists and seek measures to prevent similar cases in the future. A Vietnam-Cambodia joint working group inspected area between border marker 202 and 203 in Moc Hoa district in the southern Vietnamese province of Long An, where the incident happened on June 28, leaving seven Vietnamese people injured. Nguyen Anh Dung, Deputy Chairman of the National Boundary Commission under the Ministry of Foreign Affairs, led the Vietnam’s team, according to the Vietnamese ministry. The Cambodian team was led by Long Visalo, Secretary of State at the Cambodia’s Ministry of Foreign Affairs and International Cooperation. Visalo is also the head of Cambodia’s investigation board for the incident.

During their inspection, the two sides listened to witnesses from both countries, while the Cambodian team visited the injured Vietnamese and asked for their sympathy.

After the inspection, the joint team had a meeting in Cambodia’s Svay Rieng province, during which they strongly determined to prevent similar cases from repeating in the future.

The two sides also undertook to respect reached agreements and treaties as well as the joint press communiqué signed between Vietnam and Cambodia on January 17, 1995. The incident in question happened at 2:20 pm on June 28 when a group of about 250 Cambodians traveled past border marker No. 203 and then crossed deeply into Vietnamese territory in Long An’s Moc Hoa District.

About 20 Vietnamese tried to stop the group of Cambodians when the intruders reached 400 meters beyond the border marker, bringing flags and sticks along with them, according to Huynh Trung Kien, an eyewitness.

Despite the fact that these locals stood in a line as a barrier, the intruders moved forward and then assaulted the Vietnamese with sticks, crash helmets and flag poles, Kien told Tuoi Tre (Youth) late June.

It was not until Vietnamese border guards and militiamen arrived that the extremists halted the attack and left Vietnamese territory. After the incident, Vietnamese foreign ministry spokesperson Binh said at a press briefing on June 30 that Vietnam strongly criticized the said violent actions by Cambodian extremists. “We request that Cambodian authorities take measures to satisfactorily settle the incident and prevent similar actions from recurring in the future in order to ensure the smooth implementation of border delineation and marker planting for the common interest of both peoples,” he said. Among these Cambodian extremists were a number of parliamentarians from the opposition Cambodia National Rescue Party, according to the Vietnamese foreign ministry.