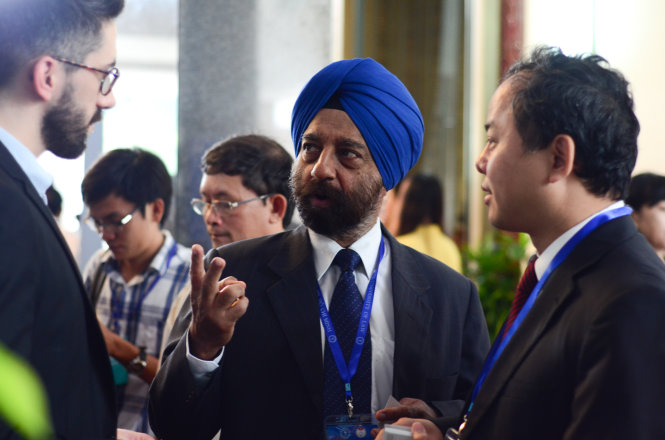 The event, regarded as a scientific forum, focused on two issues – the legal aspect of the construction of artificial islands by Beijing and its impacts on peace, security, economic and trade development in the region.

Beijing has sucked and dredged sand from the sea bottom to elevate the level of the submerged shoals with a total area of tens of square kilometers.

Experts and scholars agreed at the conference that China has challenged international law by imposing a so-called ‘safety zone’ of 12 nautical miles on the waters and airspace around these illegal artificial islands.

Doctor Ngo Huu Phuoc, from the Ho Chi Minh City University of Law, said in his speech at the conference that, “It is lawful for a coastal nation to build an artificial island within its territorial waters and the man-made structure must be used for civil and economic purposes and rescue, not for military ends.”

But China has carried out its mass ‘islandization’ on the above submerged shoals around a thousand nautical miles away from its beach and some of the man-made entities have been equipped with weapons and have ports suitable for landing crafts.

“It definitely goes against the 1982 UNCLOS [the United Nations Convention on the Law of the Sea],” Dr. Phuoc added.

“In addition, an artificial island is not granted the status of a natural island, meaning that it has no territorial waters.”

An artificial island is only allowed to extend a safety zone of just 500m from its side, he noted.

Doctor Erik Franckx, member of the Permanent Court of Arbitration in The Hague (The Netherlands) and professor of international law at the Vrije Universiteit Brussel, said that Brazil has recently proposed the International Maritime Organization expand the safety zone for an artificial structure at sea by up to two kilometers, but the proposal was rejected.

So, it is clearly unlawful for China to claim a ‘safety zone’ of 12 nautical miles for the waters and airspace around the artificial islands, he confirmed.

Agreeing with the above points of view, Vice Admiral Anup Singh, former Flag Officer Commanding-in-Chief, India’s Eastern Naval Command, told the conference that China “turns international law into a donkey” with its illegal construction of artificial islands in the East Vietnam Sea and its unlawful claim for around 80 percent of the sea.

At least 300 acres or 120 hectares of coral reefs on the sea bed have been ruined by China’s illegal construction.

The coral areas are the natural habitats of numerous species of fish.

Besides, China’s ‘islandization’ threatens the safety of shipping routes in the East Vietnam Sea which cargo worth thousands of billions of U.S. dollars passes every year, according to Doctor Nguyen Ba Dien, chairman of Vietnam’s Scientific Research Institute of Sea and Islands.

It also threatens the historical livelihood of millions of fishermen of coastal nations facing the East Vietnam Sea, mainly Filipinos and Vietnamese, he added.

The conference, co-organized by the Vietnam Lawyers Association and the Ho Chi Minh City University of Law, attracted the participation of over 250 delegates including 50 scientists and scholars from Belgium, Russia, India, Indonesia, Japan, the Philippines, and Vietnam.