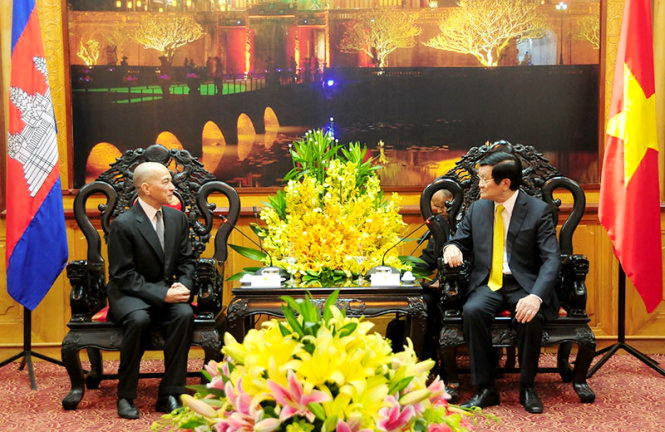 Vietnam has always appreciated and continues to give high priority to beefing up cooperation with Cambodia.

Vietnamese State President Truong Tan Sang made the statement at his meeting in the central city of Hue on Monday with visiting Cambodian King Norodom Sihamoni, who began his four-day leisure tour of Vietnam the same day.

The tour is undertaken at the invitation of President Sang and Vietnam’s Party General Secretary Nguyen Phu Trong.

The president told his guest that the Vietnamese Party, State and people treasure the traditional friendship and cooperation with Cambodia, for the sake of both peoples, and for the peace, stability, and development in the region.

Cambodian King Sihamoni said Cambodians will never forget the valuable assistance that the Party, State and people of Vietnam have provided them with in all circumstances.

The guest pledged to continue promoting the friendship and cooperation between the two countries.

During his stay, which lasts until Thursday, the king is scheduled to visit cultural and historical attractions in Hue and Da Lat, a resort town in the Central Highlands.

In related news, a senior military delegation led by Vietnamese Deputy Minister of Defense Nguyen Chi Vinh has been attending the three-day Vietnam – Cambodia Dialogue on National Defense Policies that will end today in Cambodia, the Vietnam News Agency reported.

At the deputy ministerial-level event, the first of its kind, the two sides have reviewed bilateral cooperation between the two countries, and worked out measures to step it up in the future.

They also discussed international and regional issues of mutual concern and their impacts on Vietnam-Cambodia relations, the news agency said.