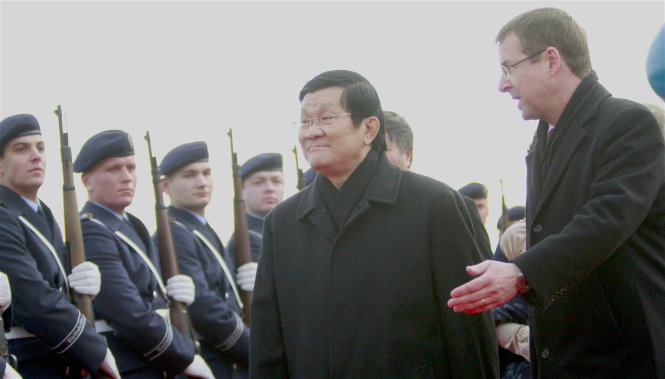 Vietnamese State President Truong Tan Sang will hold talks with his German counterpart Joachim Gauck on Wednesday, as part of his three-day visit to Germany.

President Sang and the First Lady, alongside a delegation of elite officials, arrived in Germany on Tuesday afternoon for the visit that aims to strengthen the strategic partnership between the two countries.

This is the first visit of a Vietnamese head of state to Germany since the European country was reunified in 1990 and marks the 40th anniversary of bilateral diplomatic ties between the two nations.

A welcoming ceremony was organized for the Southeast Asian country’s president at Berlin Tegel Airport with two fighter jets and a 21-gun salute.

A ceremonial reception including a guard of honor was scheduled to take place at the German Presidential Palace on Wednesday morning.

After the grand welcome, the two nations’ heads of state will hold several talks and then meet with the press to announce the results.

These will include the signing of the two countries’ intergovernmental agreement on cooperation in science-technology protocols to amend the 1994 air transport deal, a memorandum of understanding on collaboration on agriculture, cooperative contracts between Vietnam’s low-cost airline Vietjet and German carrier Lufthansa, and others.

At the meeting, President Sang expressed his appreciation for the patriotism of the Vietnamese community in Germany after they had set up a fund to build a vessel for the Vietnamese navy.

There are around 130,000 Vietnamese people living in Germany, of whom thousands have run successful businesses in the European country, said Professor Pham Ngoc Ky, chairman of the Vietnamese Business Association in Germany.

The U.S. supports a strong, prosperous, and independent Vietnam, as well as a free, open, healthy, and resilient Indo-Pacific region