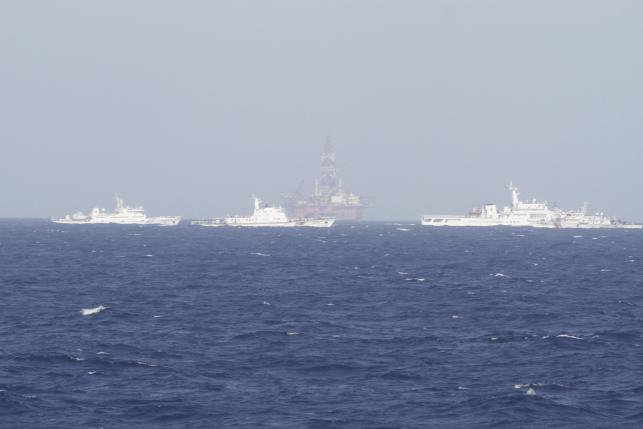 HANOI, April 7 – Vietnam demanded China move a controversial oil rig on Thursday and abandon plans to start drilling in waters where jurisdiction is unclear, the latest sign of festering unease among the two neighbours.

The $1 billion rig, which was at the centre of a fierce diplomatic stand-off between the countries in 2014, had moved into an area of the Gulf of Tonkin in the East Vietnam Sea about which Vietnam said the two countries were still "executing delineation discussions".

China calls the rig Haiyang Shiyou 981. Vietnam refers to it as Hai Duong 981.

"Vietnam resolutely opposes and demands China cancel its plan to drill and immediately remove the Hai Duong 981 oil rig out of this area," Foreign Ministry spokesman Le Hai Binh said in a statement on the government's news website.

China claims most of the resource-rich East Vietnam Sea amid rival claims by Brunei, Malaysia, the Philippines, Taiwan and Vietnam.

China, Binh said, should take "no further unilateral actions that further complicate the situation, and make practical contributions to peace and stability".

Two years ago, China parked the rig for 10 weeks in Vietnam’s exclusive economic zone, triggering their worst row in decades and an outcry among Vietnamese nationalists.

Many experts call the move a miscalculation by Beijing that played into the hands of the United States. Since the row, Vietnam has become closer to Washington than ever before.

Vietnam closely tracks the movement of the oil rig which has operated as far away as the Bay of Bengal and has been close to disputed waters several times since 2014.

It was the second occasion this year that Vietnam has protested against the rig's activity, both times coinciding with leadership changes in Hanoi.

Vietnam swore in a new prime minister on Thursday and a new president last week. Its previous complaint about the rig was in January, two days before the start of its Communist Party's five-yearly congress.

Binh also criticised China's decision to start operating a lighthouse on one of its artificial islands in Vietnam’s Truong Sa (Spratly) archipelago, which he said violated Vietnamese sovereignty and was "illegal and worthless".