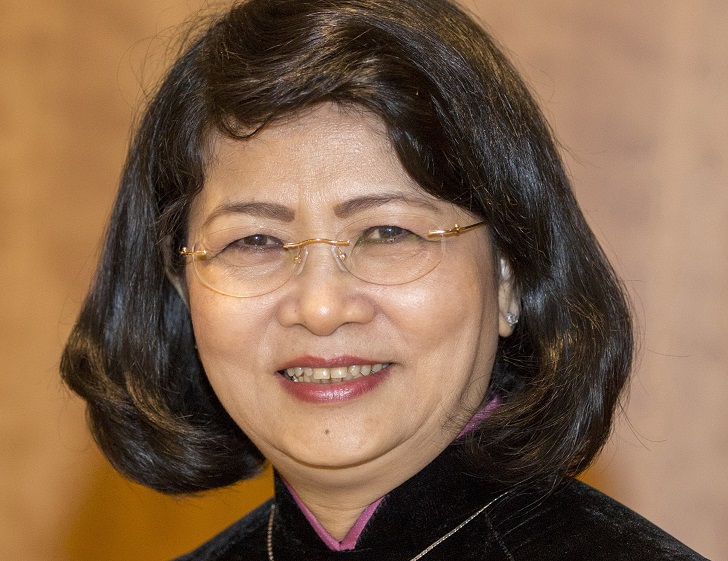 Vietnam’s lawmaking National Assembly continued the personnel endorsement for the next five-year term on Friday by electing the country’s new deputy state president and heads of the judicial system.

Dang Thi Ngoc Thinh, deputy chief of the Office of the Party Central Committee for the previous term, has been named by members of the legislative body as the country’s deputy state president for the 2016-21 tenure.

Thinh received a 90.09 percent approval rating after 450 out of 490 delegates cast their vote.

Born in 1959 in the central province of Quang Nam, Thinh holds a master’s degree in Party building.

She was previously the secretary of the Party Committee in the southern province of Vinh Long, standing vice president of the Vietnam Women’s Union, and member of the 11th and 12th Party Central Committee.

The newly elected chief justice pledged to comply with the law and impose justice, resolutely deter criminals and violations, be dedicated to protecting the human and civil rights of the people, and fulfill all responsibilities as a head of the Vietnamese judicial institution.

Binh, born in 1958 in the central province of Quang Ngai, holds a bachelor’s degree in law, a doctorate, and a certificate in advanced political theory.

His résumé includes assuming high-ranking positions at the Ministry of Public Security and the Quang Ngai Party Committee.

Binh became the prosecutor general of the Supreme People's Procuracy in 2011.

Le Minh Tri, deputy head of the Central Committee of Internal Affairs, has been chosen as the new prosecutor general of the Supreme People's Procuracy after winning a 63.19 percent approval rating during the election.

Holding a bachelor’s degree in law and a diploma in advanced political theory, Tri used to be the chairman of the People’s Committee in the southern city and became the deputy head of the Central Committee of Internal Affairs in 2013.

The newly appointed officials have made their oaths of allegiance to the country, people, and constitution.