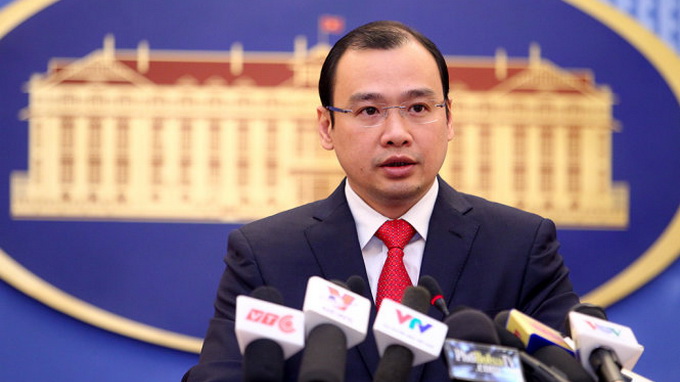 Vietnam’s Ministry of Foreign Affairs on Thursday condemned last Wednesday’s visit by two Taiwanese lawmakers to one of the Vietnamese islands in the East Vietnam Sea.

The Japan Times reported on Thursday last week that Lo Chih-cheng and Wang Ding-yu, both members of the Taiwanese legislature’s Foreign and National Defense Committee, had written on their Facebook pages about their visit to Ba Binh early the previous morning

Lo and Wang are both members of the Democratic Progressive Party (DPP), the current majority ruling party in Taiwan.

The two reportedly visited the island together with six other legislators.

Ba Binh Island is the largest naturally formed feature in Truong Sa that has been illegally occupied by Taiwan.

“The recent visit of some Taiwanese officials to Ba Binh was a serious infringement of Vietnam’s sovereignty over Truong Sa,” Spokesperson Binh said in the ministry’s statement on Thursday.

“Vietnam strongly opposes such actions and demands that Taiwan put an end to similar activities and contribute to peace and order in the East Vietnam Sea,” he underlined.

“Vietnam asserts its indisputable sovereignty over the archipelagoes of Hoang Sa [Paracel] and Truong Sa,” Binh added. “Any foreign activity on these islands without Vietnam’s permission is unlawful.”

The move by the Taiwanese lawmakers came after the Permanent Court of Arbitration in The Hague ruled on July 12 that China’s blanket claim to much of the East Vietnam Sea has no legal basis.