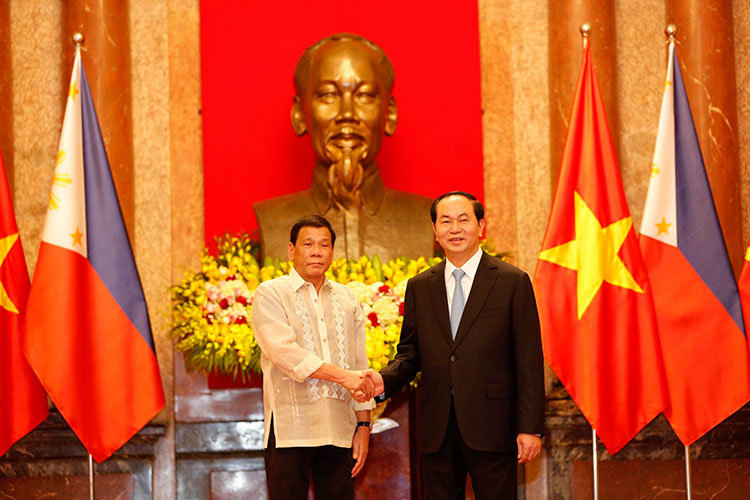 Vietnam and the Philippines are set to provide their businesses with more favorable opportunities to invest in a variety of fields.

According to Vietnam’s Ministry of Foreign Affairs, President Quang considered the visit to be of great significance in the reinforcement and enhancement of the two nations’ strategic partnership.

During their conversation, the two leaders agreed to carry out more exchanges between all-level delegations and maintain cooperation in multiple fields.

Given a bilateral trade turnover of nearly US$3 billion between the two countries in 2015 and the current business operations of Filipino investors in Vietnam, Quang welcomed further interest from Filipino enterprises in the agriculture, food processing, and tourism industries.

The Vietnamese head of state also called on Manila to provide more favorable conditions for businesses in Vietnam to participate in Filipino infrastructure development, oil and gas exploitation, and various service industries.

He confirmed that Vietnam would continue its stable and sustainable export of rice to his guest’s home country.

Collaboration in security and defense is considered a key central pillar of Philippines- Vietnam strategic cooperation, according to the two leaders.

They consented to boost the efficiency of policy dialogues between the two defense ministries, strengthen ties in military training, research, and experience exchanges, and assist each other in peacekeeping efforts within the United Nations.

Quang and President Duterte promised to direct their security agencies to exchange information and coordinate in the fight against crime, terrorism, drugs, and human trafficking, while expediting negotiations on the extradition and transfer of sentenced criminals.

President Quang also praised the Filipino government’s humanitarian policies and cooperation on issues relating to illegal fishing operations over the past years and asked that the Philippines consider the release of all Vietnamese fishermen currently detained in the country.

Regarding the situation in the East Vietnam Sea, the two parties pledged to preserve the peace, security, stability, and freedom of flight and navigation in the maritime area and the region.

They urged relevant nations to avoid violence or threat of force and to solve any disputes via negotiations and with respect the international law, namely the 1982 United Nations Convention on Law of the Sea (UNCLOS).

The two sides reiterated their support for the full and effective implementation of the Declaration on the Conduct of Parties in the East Vietnam Sea (DOC) and cooperation in the expedited establishment of a Code of Conduct (COC) for the seaway.

President Dutert also met with Vietnamese Prime Minister Nguyen Xuan Phuc and Party chief Nguyen Phu Trong on the same day, before concluding his trip to Vietnam in the evening.