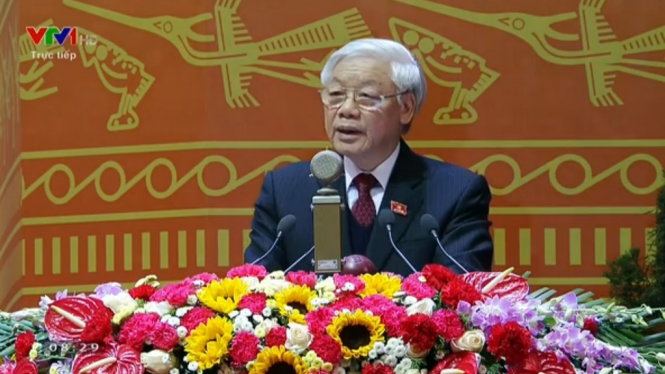 The top official of the Communist Party of Vietnam will visit China this month to strengthen the strategic partnership between the two countries, a chief diplomat told local reporters earlier this week.

General Secretary Nguyen Phu Trong is slated to go on an official trip to Beijing, Deputy Prime Minister Pham Binh Minh, who is also the foreign minister, said on Thursday in Hanoi without providing a specific date.

Minh only said the trip was scheduled for January.

The trip is meant to cement the strategic partnership between Vietnam and China, which is indicative of Hanoi’s foreign policy that is always made to forge friendship with various countries, the diplomat said, adding that Beijing is an important comprehensive strategic partner.

The visit manifests Vietnam’s wish to deepen its ties with China, creating a peaceful and stable environment, the deputy premier said.

The two countries’ leaders will pay more visits of this nature this year, Minh noted.

The diplomat also told the media that U.S. Secretary of State John Kerry would visit Vietnam early next week.

Kerry should have paid a visit to Vietnam in December but he was busy attending other events.

“This will not be his first visit to Vietnam. As far as I remember, Kerry comes to Vietnam annually. Next week he will come again as U.S. Secretary of State,” Minister of Foreign Affairs Minh said. “That has nothing to do with the new U.S. administration or secretary.”

Donald Trump and his cabinet will take office on January 20 after he won the general election on November 8, 2016.

Minh underlined that Kerry has positively contributed not only to the Vietnam-U.S. rapport as a secretary of state but also to the normalization of diplomatic relations between the two countries as a Senator.

Kerry was a Massachusetts Senator from 1985 to 2013 while Hanoi and Washington restored ties in 1995, twenty years after the end of their war.

“Kerry’s upcoming visit indicates that we are advancing relations in a new framework – the comprehensive partnership,” Minh said. “That proves any U.S. policy, no matter which party makes it, is that of the U.S. government toward Vietnam.”

The comprehensive partnership was officially announced in July 2013 during then-Vietnamese State President Truong Tan Sang’s visit to the U.S. at the invitation of President Barack Obama.