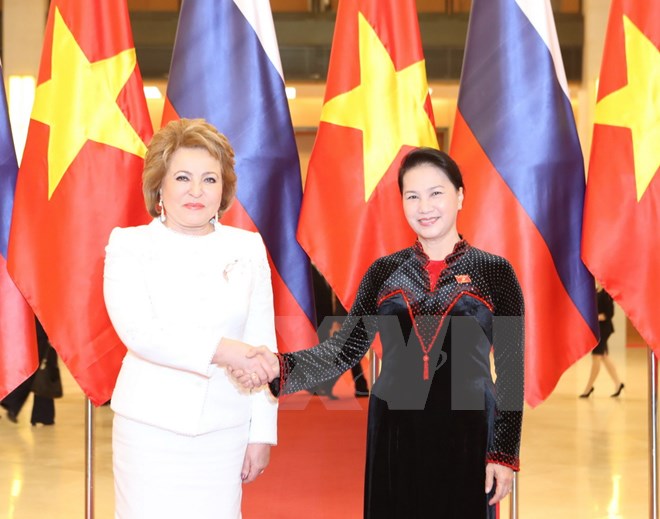 Vietnam and Russia have pledged to cement ties between the two nations’ legislative bodies, according to the Vietnam News Agency.

Vietnam’s National Assembly Chairwoman Nguyen Thi Kim Ngan held talks with the President of the Federal Council of Russia, Valentina Ivanovna Matvienko on Tuesday morning, as part of the latter’s visit to Hanoi from February 20 to 22.

During the conversation, the Vietnamese legislator said that the visit would be a success, contributing to the enhancement of cooperation between the two legislatures as well as the two countries.

She reiterated that Vietnam would always prioritize the development of its comprehensive strategic partnership with Russia, before praising the two parties’ mutual support at multilateral forums, especially at the United Nations.

Replying to her host, President Matvienko expressed her delight at the maintenance of regular political dialogues at all levels, particularly at parliamentary, ministry and agency levels.

Russia will further strengthen the friendship and cooperation between the two nations’ legislatures, the visiting official stated.

Both sides agreed that the regular exchange of delegations between the Vietnamese NA and the Federal Council of Russia would facilitate the enhancement of  bilateral ties.

The two legislatures will create more favorable conditions to expand ties in energy, oil and gas, agriculture, industry, and tourism while intensifying the supervision of cooperation agreements.

The two leaders reached consensus on the bilateral trade turnover target of US$10 billion by 2020.

The Vietnamese NA chairwoman also hoped to deepen collaboration in national defense and security, education and training, and science and technology among other fields.