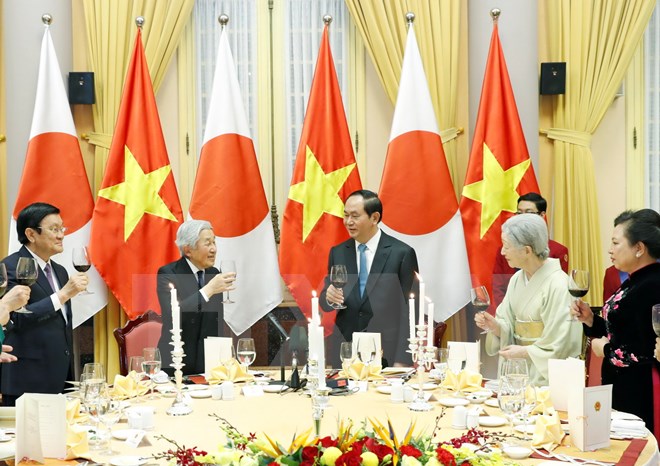 Japanese Emperor Akihito and Empress Michiko joined talks with Vietnam’s state president and National Assembly chairwoman to discuss the two nations’ relationship, as part of their first-ever state visit to Hanoi from February 28 to March 5.

During their conversation with President Tran Dai Quang on Wednesday morning, the Emperor and Empress expressed their delight in visiting the Southeast Asian country and contributing to the beautiful friendship between Hanoi and Tokyo.

The leaders reviewed the two nations’ long-standing relationship, stemming from an eighth century visit by Vietnamese Great Master Phat Triet to the former Japanese capital of Nara to spread Buddhism and culture.

The relationship was later fortified when Japanese traders landed in Hoi An Port in the central Vietnamese province of Quang Nam in the 16th and 17th centuries.

Emperor Akihito stated that the historical exchange laid down a significant foundation for the two sides to boost their partnership and facilitate the growth of friendship between the two peoples.

He and the Vietnamese head of state also shared their satisfaction with the positive developments of the two countries’ ties over the past four decades and hope to continue to grow the relationship well into the future.

During the meeting, President Quang and the First Lady introduced the Japanese guests to the diversity and unique identity of the Vietnamese culture, which has absorbed world cultural quintessence.

They also expressed their hope that more members of the Japanese Royal Family will visit Vietnam in 2018 to mark the occasion of the 45th anniversary of diplomatic ties between the two nations.

Holding talks with the Japanese Emperor and Empress on the afternoon of the same day, NA Chairwoman Nguyen Thi Kim Ngan extended her gratitude toward Japan for assisting Vietnam in its socio-economic development, including the construction of major infrastructure projects.

The Emperor and Empress aired their hope that their trip to Vietnam will contribute to further deepening friendly ties between the two countries.

They shared their sympathy to the Vietnamese people who suffer from the serious consequences of climate change.

Both sides agreed that countries worldwide need to focus on environmental protection for the sake of their people’s well-being.