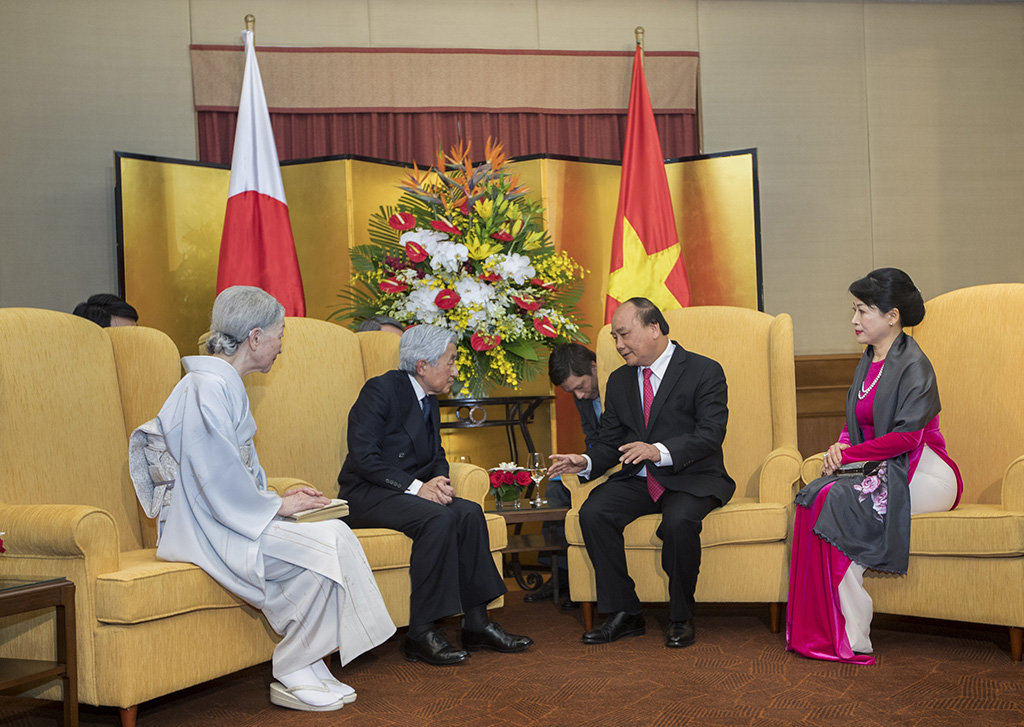 The Vietnamese premier convened a meeting with the imperial couple in Hanoi on Thursday, as part of the latter’s state visit to the Southeast Asian country from February 28 to March 5.

The Vietnamese head of government expressed his delight at the vigorous, comprehensive and substantive development of the Vietnam-Japan friendship and cooperation, stating that the trip would enhance their mutual understanding and ties in various fields.

He highlighted that the visit of the Emperor and Empress would become a memorable milestone in the two countries’ bilateral collaboration.

PM Phuc extended his gratitude toward the Japan for aiding Vietnam in its national development, affirming that Japan is now a leading economic and trade partner of the Southeast Asian country.

The Vietnamese premier praised the role and effective contribution of Japanese enterprises in Vietnam, adding that the Emperor and Empress’s visit will create a new momentum for future partnership between enterprises of the two parties.

Replying to their host, Emperor Akihito and Empress Michiko thanked the Vietnamese leaders and people for their warm welcome.

The guests also expressed their appreciation toward Vietnam for preserving Japan’s relics in Hoi An City, located in the central province of Quang Nam, and supporting the East Asian country to address consequences left by earthquake and tsunami in 2011.

The two sides reminded the historical links and cultural similarities between Vietnam and Japan, including rice cultivation, sericulture, and the love for peace, which are the foundation to intensify bilateral relations.

PM Phuc invited members of Japan’s royal family to visit Vietnam on the occasion of the 45th anniversary of two nations' diplomatic ties in 2018.

He also stated his wish to meet the Emperor and Empress again during his visit to Japan in the near future.