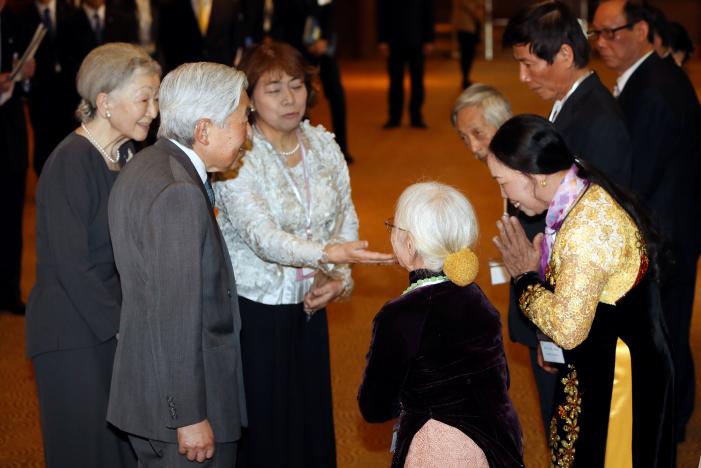 Japan's Emperor Akihito met the Vietnamese families of Japanese World War Two soldiers on Thursday on his first visit to Vietnam, one of many trips he has used to try to soothe the wounds of war.

Some 16 descendants of marriages between Vietnamese women and Japanese soldiers met Emperor Akihito, 83, and Empress Michiko, 82, including 94-year-old widow Nguyen Thi Xuan. Most of the family members were in their 60s.

"We would like to share our understanding toward your difficult time in the past," the empress told Xuan.

After that war ended, the former soldiers went back to Japan, but many were unable to take their families with them.

"I'm so touched to meet the emperor and empress today. Though old now, they still fly all the way here to meet us," said Xuan, the only surviving widow attending the meeting.

Japan has been Vietnam's biggest aid donor over four decades. For private investment, it ranks second to South Korea.

"We thank you and hope the ties between our countries will be better and better," Xuan said as she gave the imperial couple a hug.