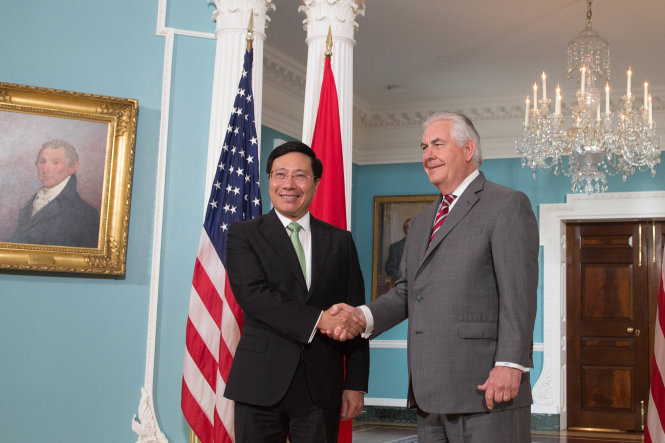 U.S. President Donald Trump has invited Vietnam’s Prime Minister Nguyen Xuan Phuc for an official visit in a letter delivered by his National Security Advisor to the Vietnamese deputy premier on Thursday.

Deputy Prime Minister Pham Binh Minh, who also serves as Vietnam’s foreign minister, is on a two-day visit to the U.S., during which he was scheduled to meet with his American counterpart Rex Tillerson, Secretary of the Treasury Steven Mnuchin, and National Security Advisor H.R. McMasster.

During their talks in Washington on Thursday, Deputy PM Minh extended an invitation from the office of Vietnamese State President Tran Dai Quang inviting President Trump to attend the Asia Pacific Economic Cooperation (APEC) summit and have an official visit to Vietnam.

In a separate statement on Thursday, U.S. Vice President Mike Pence confirmed that Trump will attend the 2017 APEC in Vietnam, scheduled for November in the central city of Da Nang, along with two other regional summits to be held in the Philippines.

Upon receiving the official invitation letter from Minh, McMaster thanked the Vietnamese deputy premier on behalf of Trump, reiterating that the U.S. president will visit Vietnam and attend the APEC summit.

The U.S. National Security Advisor also delivered an invitation from Trump to Deputy PM Minh for the Vietnamese premier to hold an official visit to the U.S.

In mid-December 2016, then President-elect Trump also told PM Phuc in a telephone call he wanted to further strengthen the fast-warming ties between the two countries. The Vietnamese head of government also said in March that he is ready to visit the United States to promote ties, particularly in trade.

During the meeting with secretary Tillerson, Deputy PM Minh asserted that Vietnam respects and is ready to work with the new Trump administration to fortify and deepen the relationship between the two countries.

In response, Tillerson hailed the U.S. visit by Minh and expressed his belief that bilateral relations between the two countries will continue to develop. He also asserted that the new U.S. administration is committed to improving its comprehensive partnership with Vietnam.

The U.S. Secretary of State also expressed his hope to visit the Southeast Asian country in the future.

Secretary of Treasury Mnuchin also commented on the burgeoning economic-trade ties between the U.S. and Vietnam, expressing his hope that the two countries will continue their cooperative efforts to boost trade relations.