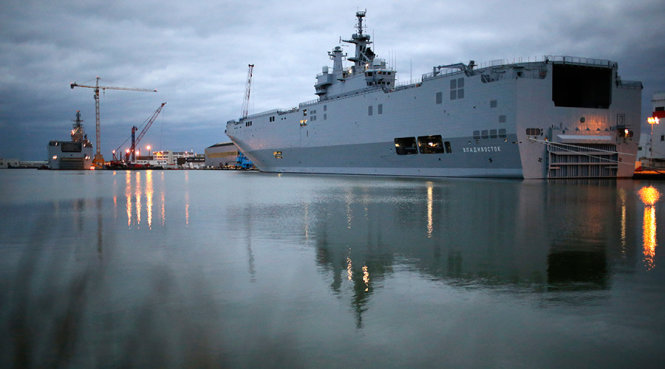 French Navy’s amphibious assault ship Mistral and frigate Courbet joined a Vietnam’s High Command of Naval Zone 2 ship in an exercise on Friday, as part of their week-long friendship visit to the country.

The French battleships and Vessel 15 of the Brigade 171 practiced the code of conduct for unplanned encounters at sea, communication, search and rescue and tactical skills off the southern coastal province of Ba Ria-Vung Tau.

The three-hour joint exercise was done as per international marine regulations, aiming to boost the cooperative relations and understanding between the Vietnamese and French navies.

Prior to joint exercise, members of the French battleships paid a courtesy call to Ho Chi Minh City authorities and visited the Phu My Port in Ba Ria-Vung Tau on Thursday.

The Mistral is one of the three classes of amphibious assault ship, also known as a helicopter carrier, of the French Navy.

Referred to as "projection and command ships," a Mistral-class ship is capable of transporting and deploying 16 NH90 or Tiger helicopters, four landing barges, up to 70 vehicles including 13 AMX Leclerc tanks, or a 40-strong Leclerc tank battalion, and 450 soldiers.

Courbet is a second-line multi-mission stealth frigate of the French Navy.