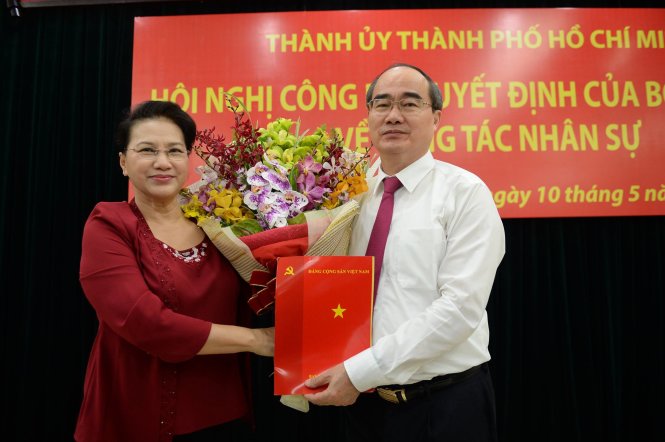 Nguyen Thien Nhan, a Politburo member who is chairman of the Vietnam Fatherland Front, has been appointed secretary of the Party Committee of Ho Chi Minh City, according to a decision made on Wednesday by the Party Central Committee’s Organization Commission.

The Party Committee is the leading organ of the Communist Party of Vietnam in each of the country’s cities and provinces.

Nhan replaces Dinh La Thang, who was warned and then dismissed from the Politburo on Sunday for multiple acts of financial misconduct committed while steering a state-run oil and gas company between 2009 and 2011.

At a ceremony held this morning at the Ho Chi Minh City Party Committee headquarters, Pham Minh Chinh, chairman of the Organization Commission, presented the Politburo’s decision to appoint Nhan.

Chinh also presented another directive from the Politburo, which stated that in addition to Sunday’s disciplinary action, Thang had been dismissed with immediate effect from his post as the southern city’s Party chief for the 2015-20 tenure, and transferred to work as deputy chairman of the Central Economics Committee.

Nguyen Thien Nhan was born in 1953 in the southern province of Tra Vinh.

He worked in the army and then as a lecturer, becoming vice-rector of the Ho Chi Minh City University of Technology before starting his political career.

Nhan earned his master’s degree at Oregon University and attended a training course on investment project assessment at Harvard. He completed his doctorate in cybernetics in Germany in 1979, and receiving the title of professor of economics in Vietnam in 2002.

In May 2013 he was elected to the Politburo.

Nhan has a long history of working in Ho Chi Minh City.

In July 2006 he was appointed Minister of Education and Training, and Deputy Prime Minister one year later, while retaining his ministerial education post.

In September 2013, Nhan was appointed chairman of the Vietnam Fatherland Front.