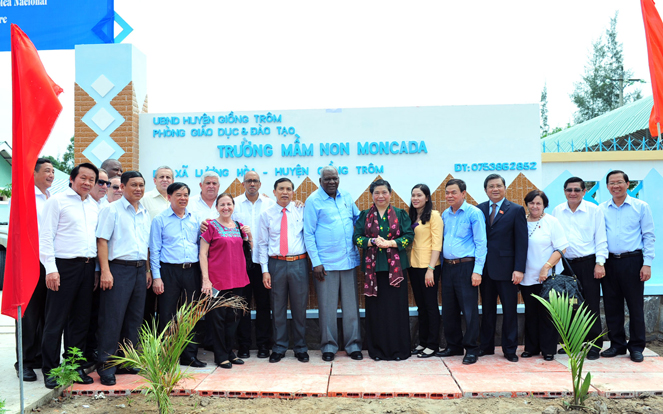 A top Cuban lawmaker has paid a visit to a preschool in southern Vietnam and symbolically planted a tree there to honor the ties between the two countries. Esteban Lazo Hernandez, President of the National Assembly of People's Power, Cuba's parliament, came to Moncada Kindergarten in Ben Tre Province on Saturday, as part of his June 11-18 official visit to Vietnam.    Attending the ceremony to inaugurate the preschool and rename it Moncada from Luong Hoa in Luong Hoa Commune, Giong Trom District, President Hernandez planted a symbolic tree in the schoolyard. In 1983, Luong Hoa was given the title Moncada Village by the Cuban government. Moncada was the place where the Cuban revolution that demolished the dictatorship Batista started. “Today, I plant a green tree in the kindergarten named Moncada. From the bottom of my heart, I think this tree will grow evermore like the relationship between Vietnam and Cuba,” President Hernandez feelingly said. Diplomatic relations between Vietnam and Cuba were established on December 1, 1960. Since then, Vietnam has become Cuba’s second-largest trading partner in Asia. The former Cuban leader, Fidel Castro, passed away at the age of 90 on November 25. The Cuban revolutionary icon was the first and only foreign leader to visit the southern liberation area of Vietnam when the U.S. aggression war was ongoing, bringing a great encouragement to Vietnamese soldiers and people. After his death, Vietnam held a national day of mourning for Castro on December 4.