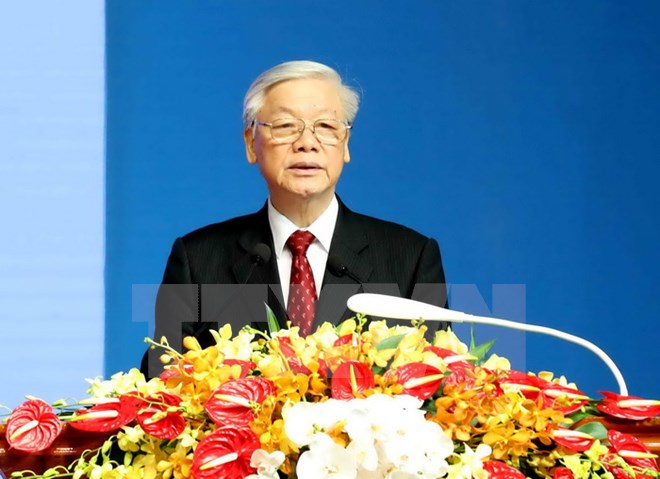 Vietnamese Party chief Nguyen Phu Trong has praised the positive developments of the Vietnam- Laos relationship over the past five decades.

A grand ceremony was held in Hanoi on Tuesday morning to mark the 55th anniversary of the two nations’ diplomatic ties and 40 years of the signing of the Vietnam-Laos Treaty of Amity and Cooperation.

Speaking at the celebration, Trong stated that Vietnam and Laos are very close neighbors and the two peoples have a special and traditional bond.

The bilateral ties have been deepened and effective in many fields and types of cooperation, especially the political collaboration between the two Parties, the Vietnamese leader continued.

He highlighted the need to effectively realize agreements and strategic targets set by both sides, further expanding the solidarity and comprehensive cooperation between the two countries.

During the ceremony, Vice President Viphavanh expressed his gratitude towards the Vietnamese Party, state, and people, saying that Laos is determined to preserve its special friendship with Vietnam.

A similar event was also held in Vientiane with the participation of Laotian President Bounnhang Vorachith and Prime Minister Thongloun Sisoulith among other leaders.

Several activities were also organized in Ho Chi Minh City to mark the 55th anniversary, including the municipal People’s Committee being granted the First-class Labor Order by the Lao state.