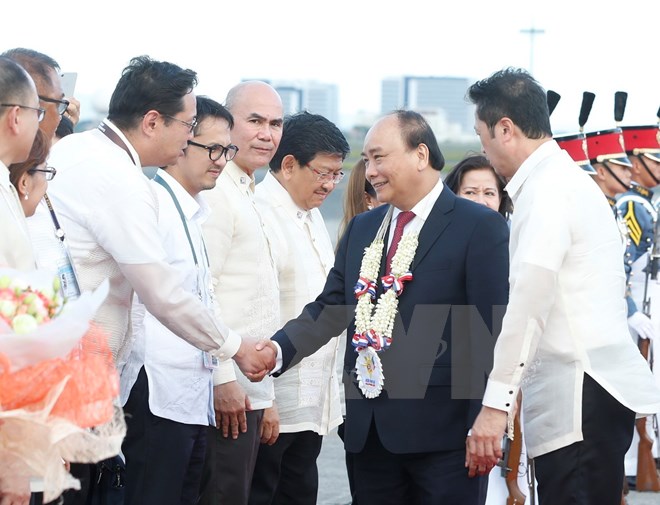 Vietnamese Prime Minister Nguyen Xuan Phuc is scheduled to attend the 31st ASEAN Summit in the Philippines this week.

Prime Minister Phuc arrived in Manila on Sunday afternoon in preparation for a series of events including the summit from November 12 to 14.

Yesterday evening, the Vietnamese head of state attended a gala dinner marking the 50th anniversary of ASEAN, according to the Vietnam News Agency.

The 31st ASEAN Summit was set to commence on Monday morning.

Alongside the main event, the Vietnamese premier and his delegation are scheduled to take part in the 20th Meeting of the ASEAN Plus Three, a series of ASEAN meetings including China, Japan, the Republic of Korea, India, the U.S., Canada, the European Union, and the United Nations.

He will also attend the East Asia Summit, which includes ASEAN and its eight dialogue partners, including Australia, China, India, Japan, New Zealand, the Republic of Korea, Russia, and the United States.

In addition, Prime Minister Phuc will take the opportunity to be part of the ninth Mekong-Japan Summit and Regional Comprehensive Economic Partnership (RCEP) Leaders’ Meeting.

ASEAN is short for the Association of Southeast Asian Nations, a political and economic organization whose members include Brunei, Cambodia, Indonesia, Laos, Malaysia, Myanmar, the Philippines, Singapore, Thailand, and Vietnam.

The 31st ASEAN Summit is the bloc’s most important event of the year, with the participation of the leaders of 10 member states and their international partners.

As many as 55 documents are expected to be signed and passed at the meetings.