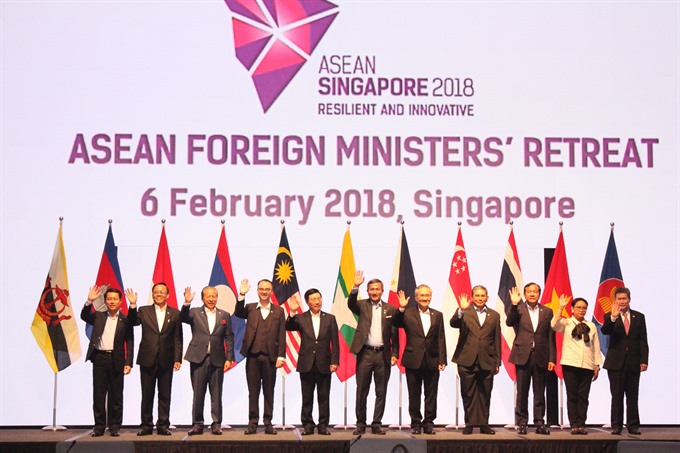 Vietnam has mentioned the situation in the East Vietnam Sea during a special meeting between ASEAN officials in Singapore this week.

The ASEAN Defense Ministers' Meeting (ADMM) Retreat was organized in the city-state on Tuesday, the Vietnam News Agency reported.

The retreat discussed orientations for defense-security cooperation among ASEAN nations in 2018, focusing on counter-terrorism, collaboration in responding to chemical, biological, radiological and nuclear weapons, and a Code for Unplanned Encounters at Sea (CUES) as proposed by Singapore, the Chair of ASEAN this year.

Along with existing challenges, the delegates agreed that ASEAN member states need to maintain unity and remain vigilant over issues relating to sovereignty, territorial disputes and maritime security.

Speaking at the event, Sen. Lieut. Gen. Vinh expressed his support for the targets proposed by Singapore, stressing that Vietnam is willing to share experience in preventing and decontaminating toxic chemicals.

Regarding the CUES, Vinh emphasized that it must be associated with the East Vietnam Sea issue, especially in preparation for the formation of a Code of Conduct (COC) for the maritime area.

They should also implement the Declaration on the Conduct of Parties in the East Vietnam Sea (DOC) and work toward the early finalization of the legally-binding COC, he suggested.

During the ASEAN Foreign Ministers’ Retreat, which was held on the same day, Vietnamese Minister of Foreign Affairs Pham Binh Minh stated that the bloc needs to highly appreciate fundamental principles to strengthen solidarity and unification.

He suggested member countries stand firm with ASEAN viewpoints on regional and international issues of mutual concern, including that of the East Vietnam Sea.

The foreign ministers consented on the proposal about practical negotiation between ASEAN and China regarding the COC for the sea.

They are expected to direct competent authorities to successfully carry out the first negotiation, which will take place in Vietnam in March.