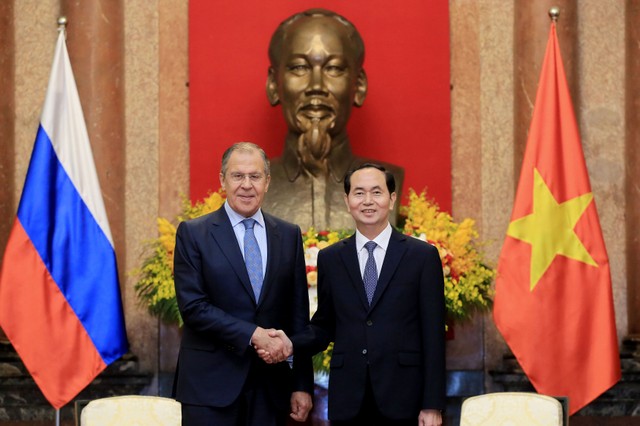 Speaking to his guest, who was on a March 22-23 visit to Vietnam, President Quang congratulating Russia on the successful presidential election, asking Lavrov to convey his congratulations to President Vladimir Putin on his re-election.

Recalling profound impressions during his official visit to Russia in June 2017 and his meeting with Russian President Putin on the occasion of the APEC Economic Leaders Meeting in Da Nang last November, President Quang asked Lavrov to convey his invitation to President Putin to visit Vietnam.

The Vietnamese leader also expressed his delight at the growth of bilateral trade between Vietnam and Russia, credited to the implementation of the Vietnam-Eurasian Economic Union Free Trade Agreement.

President Quang also called on both sides to create favorable conditions for their oil and gas businesses to cooperate effectively within Vietnam-Russia joint ventures in the two countries.

In return, minister Lavrov underlined that the Russia-Vietnam comprehensive strategic partnership, built on the long-standing friendship between the two nations and the outcomes of visits by senior leaders, has grown strongly, bringing in positive achievements.

Russia highly evaluates cooperation prospects between the two countries in defence-security and military technology, he added.

The visiting minister expressed his respect for the Vietnamese people’s love for Russian culture and language, which was reflected by the expanded cooperation in education-training and tourism.

Prior to the reception by President Quang, Lavrov held talks with Vietnamese Prime Minister and Foreign Minister Pham Binh Minh, where both sides recognized the expansion of the Russia-Vietnam cooperation, especially in the field of oil and gas.