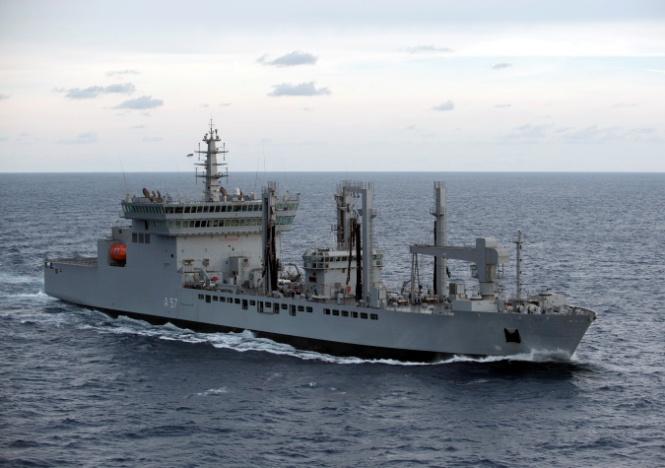 Three ships of the Indian Navy’s Eastern Fleet are scheduled to make a port call at the central Vietnamese city of Da Nang next week.

The ships, Sahyadri, Shakti and Kamorta, under the command of Rear Admiral Dinesh Kumar Tripathi, Flag Officer Commanding of the Eastern Fleet, will stay at Tien Sa Port for the May 21-25 visit, the Indian Embassy in Hanoi announced on Friday.

The port call is held as part of ongoing operational deployment of the Indian Navy’s Eastern Fleet ships to Southeast Asia and North West Pacific region.

During the visit, there would be professional interaction between personnel of both the navies, official calls and interaction with dignitaries of the Vietnamese government, according to the embassy.

Visits by local populace, guided tours for Indian Naval personnel, sports events and a band concert by Indian Navy band is also planned.  On completion of the harbor phase, both Indian Navy and Vietnam Peoples’ Navy would be undertaking exercises.

The Indian Navy has had extensive interactions with Vietnam People’s Navy, particularly in the field of training, repairs, maintenance and logistics support aimed at capacity building, according to the embassy.

The last visit by Indian Navy ship to Vietnam was in September 2017, when two of its ships INS Satpura and INS Kadmatt visited the northern port city of Hai Phong.

The upcoming visit to Da Nang seeks to enhance maritime cooperation between the two navies and will further bolster the strong bonds of friendship between the two countries and contribute to security and stability in the region and the world at large.

Bilateral relations between India and Vietnam are characterized by strong bonds of friendship based on cultural, religious and economic ties, which have been strengthened in recent years due to a vibrant economic relationship and growing convergence on security issues.

In 2016, during the official visit of Indian Prime Minister Narendra Modi to Vietnam, the relations between the two countries were elevated to the level of Comprehensive Strategic Partnership.

In January this year, Vietnamese Prime Minister Nguyen Xuan Phuc also visited India as a guest for the Republic Day and for the ASEAN-India Commemorative Summit, followed by a state visit by President Tran Dai Quang in March, which both signify momentum of the bilateral relationship.

Strong defence cooperation is a vital component of the Comprehensive Strategic Partnership between the two countries.