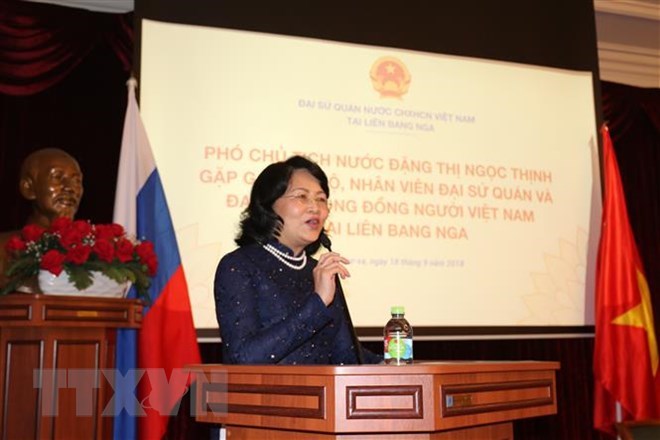 Vietnam’s Deputy State President Dang Thi Ngoc Thinh on Tuesday visited the Vietnamese Embassy in Moscow and met with the Vietnamese who are living, working, and studying in Russia.

The event took place as part of the deputy head of state’s official visit to Russia to participate in the Second Eurasian Women’s Forum, which began on Wednesday.

During the meeting at the embassy, Vietnamese Ambassador to Russia Ngo Duc Manh told Thinh that the Vietnamese community here is united and patriotic, according to the Vietnam News Agency.

The community is always striving to contribute to the Vietnam-Russia good relationship, especially after Party General Secretary Nguyen Phu Trong visited them in September last year, the ambassador said.

Manh emphasized the importance of trips paid by top Vietnamese officials to Russia, as they not only further improve the already appreciated relationship between the two countries but also play an important role in encouraging the Vietnamese community there.

The deputy head of state also encouraged the embassy staff and officials to greatly represent Vietnam while keeping up with the recognition it has received.

During the meeting with the Vietnamese community, Deputy State President Thinh told them of recent achievements regarding Vietnam’s social and economic development, including a GDP growth rate of 7.08 percent in the first nine months of this year, the fastest pace in 11 years.

Last week, Vietnam hosted the World Economic Forum on ASEAN, which attracted leaders of ten countries and representatives of 1,000 influential businesses from all over the world.

Moreover, Vietnam has been recognized for its significant effort in finding solutions to poverty, policies regarding education, health, and culture, as well as keeping a peaceful and sustainable society.

“These are just some of the good signs showing that Vietnam is successfully integrating with other countries while improving its position and credibility,” Thinh said.

Representatives of the community expressed great appreciation and admiration toward the significant achievements of the country, especially the effort to fight corruption.

The Second Eurasian Women’s Forum, taking place in St. Petersburg this year, was established with the goal of gender equality and the enhancement of the role of women in politics, economics, and the social sector.

This is the second time the forum has been held, with the first time being in 2015.