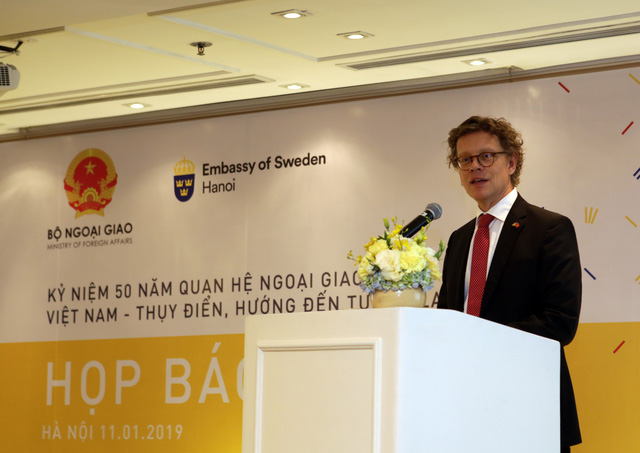 Swedish Ambassador to Vietnam Pereric Högberg used a Vietnamese verse to reaffirm the great friendship between the two countries as he addressed a press conference celebrating 50 years of bilateral diplomatic relations.

Sweden is the first Western European country to establish diplomatic relations with Vietnam, with the ties marking their 50th anniversary on Friday.

“For more than half a century, Sweden has always been a friend and a partner of Vietnam, even in the most difficult times,” Ambassador Högberg said in his remarks.

“Sweden has become the first Western country to have diplomatic relations with Vietnam. The Swedish government and our people have always expressed the support and solidarity with Vietnamese people.”

The Swedish ambassador underlined that the two countries have agreed that their bilateral relations in the past 50 years have been expanded in all sectors, from politics, diplomacy, investment to culture and education, bringing benefits to two sides’ people and also affirming the determination of both countries to promote prosperity and sustainable development.

Two-way trade between Vietnam and Sweden surpassed US$1.4 billion in 2018, according to the Vietnam News Agency. Sweden ranked 34th out of the 130 countries and territories investing in Vietnam, while about 50,000 Sweden tourists visited Vietnam during the year.

Although the diplomatic relations between the two countries is not the same as first time, Sweden continues to commit to being a dear and truthful friend of Vietnam, he affirmed.

At the end of the speech, the Pereric Högberg used a Vietnamese folk poem that reads “together we can go through hard times” to reaffirm that Sweden still is and will always remain the dearest friend of Vietnam.