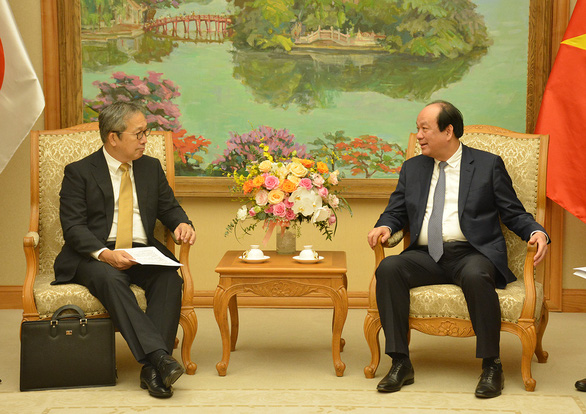 The Vietnamese Government Office discussed this trip, expected later this month, with the Japanese Embassy in Hanoi on Wednesday evening, according to the Government Portal.

Minister-Chairman of the Government Office Mai Tien Dung conferred with Japanese Ambassador Takio Yamada on preparations for that trip.

The Vietnamese official appreciated Prime Minister Suga’s decision to choose Vietnam as the first country he is visiting after taking over from Shinzo Abe, who resigned in September over health issues.

This official trip is significant to bilateral ties, especially at a time when both sides are trying to restore comprehensive cooperation, Dung said, adding that it indicates Japan’s consistent foreign policy to value relations with Vietnam and the Southeast Asian region.

Suga’s choice of Vietnam as his first overseas destination as prime minister signifies the importance of the country to Japan, Ambassador Yamada underlined.

The Japanese premier will continue deepening the rapport between Vietnam and Japan that has thrived over the past time, the diplomat said.

Yamada expressed his belief that the Vietnam-Japan relationship will keep growing in the forthcoming time, noting Suga’s visit reflects the economic trust both sides have built.

Japanese media have reported that the novel coronavirus is one of the factors affecting PM Suga’s schedule to visit foreign countries.

Vietnam and Indonesia have managed to control the virus so he decided to visit the former right in October, according to Japanese officials.