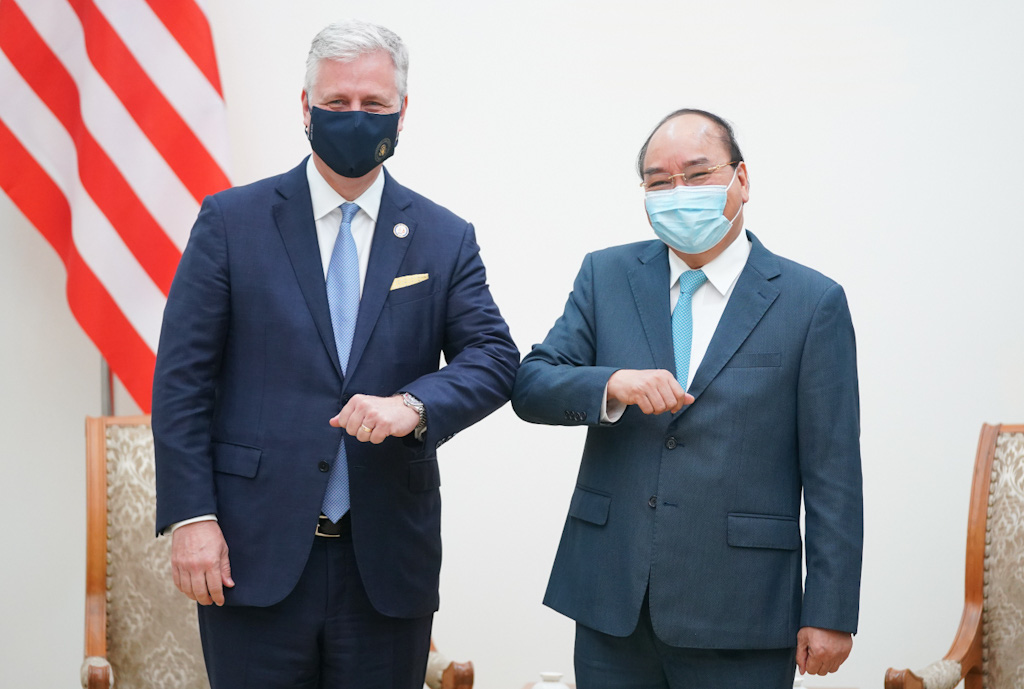 The meeting was convened within the framework of O'Brien’s visit to Vietnam on November 20-22, which is conducted on the occasion of the two nations’ 25th anniversary of diplomatic ties.

The relationship has seen comprehensive and practical development, which significantly contributes to regional and global security, peace, cooperation and development, PM Phuc said at the talk.

The premier praised the close and timely cooperation between the two countries in response to the COVID-19 pandemic, and thanked the U.S. for assisting Vietnam in dealing with flood consequences in the central region over the past months.

He particularly appreciated the U.S. Congress’s approval of US$20 million to fund the dioxin remediation project at Bien Hoa airbase, located in the southern province of Dong Nai, during the upcoming fiscal year.

The U.S.’s commitment to supporting Vietnam in war aftermath settlement, such as decontaminating dioxin hotspots, assisting Agent Orange (AO)/dioxin victims, clearing bombs and mines, and identifying the remains of Vietnamese fallen soldiers, as well as Vietnam’s efforts to help with the search for missing-in-action U.S. servicemen have contributed to enhancing mutual trust and creating a foundation for the bilateral relations to grow, he said.

Vietnam regards trade cooperation as the center and main driver of the bilateral ties, the premier said, adding that the country welcomes and facilitates the operation of foreign businesses, including those from the U.S., while providing favorable conditions for them to step up connectivity with local partners.

O’Brien praised Vietnamese enterprises’ increasing importation of U.S. goods, adding that the signing of major commercial contracts in the fields of energy infrastructure, oil and gas, industrial equipment, aviation, and IT has significantly enhanced trade ties.

The U.S. values its comprehensive partnership with Vietnam based on the principle of respect for each other’s independence, sovereignty, and territorial integrity and political institutions, as well as mutual benefits.

He added that the U.S. wants to boost the ASEAN-U.S. strategic partnership across economy, security, education, healthcare, and science among other fields in a more practical and effective fashion.