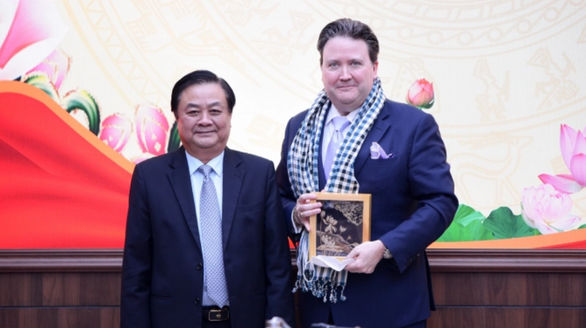 Vietnam and the U.S. are seeking ways to further strengthen their effective agricultural cooperation, with the Vietnamese agriculture chief inviting the U.S. ambassador to the Southeast Asian country to visit local honey producers.

The DOC cut the tax rate to approximately 60 percent, much lower than the previously expected rate of 400 percent.

The move will facilitate Vietnamese beekeepers in developing and expanding their honey market in the U.S., Hoan said.

Ambassador Knapper told Hoan that the two countries have cooperated well in the area of agriculture, including the protection of river resources in the Mekong Delta.

He affirmed that the U.S. wishes to become one of Vietnam’s top partners in agricultural trade.

Minister Hoan told the diplomat that Vietnam is ready to promote cooperation programs and work to remove barriers to farm produce trade between the two countries.

The ambassador expressed the U.S. appreciation for Vietnam’s strong commitment to achieving net zero emissions by 2050.

The diplomat also said the U.S. is ready to provide technical, financial, and professional support as well as personnel to become a partner to Vietnam in response to climate change.

U.S. agricultural products can contribute to ensuring Vietnam’s food security and create an abundant supply to the Vietnamese market, while the Southeast Asian country has provided diverse farm produce to American consumers, the ambassador stated.

He also expressed his hope that the U.S. will soon open the market for Vietnam’s pomelos.

In addition, the minister called on the U.S. to assist Vietnam in preservation technologies to improve farm produce quality, thereby helping Vietnamese exporters in the U.S. market.

Agreeing with this approach, Ambassador Knapper said it will benefit not only Vietnamese businesses but also the U.S. market.

Regarding the Vietnamese pomelo issue, the ambassador said the two sides are closer to an agreement, adding that American consumers will be very happy to buy the Vietnamese fruit product.