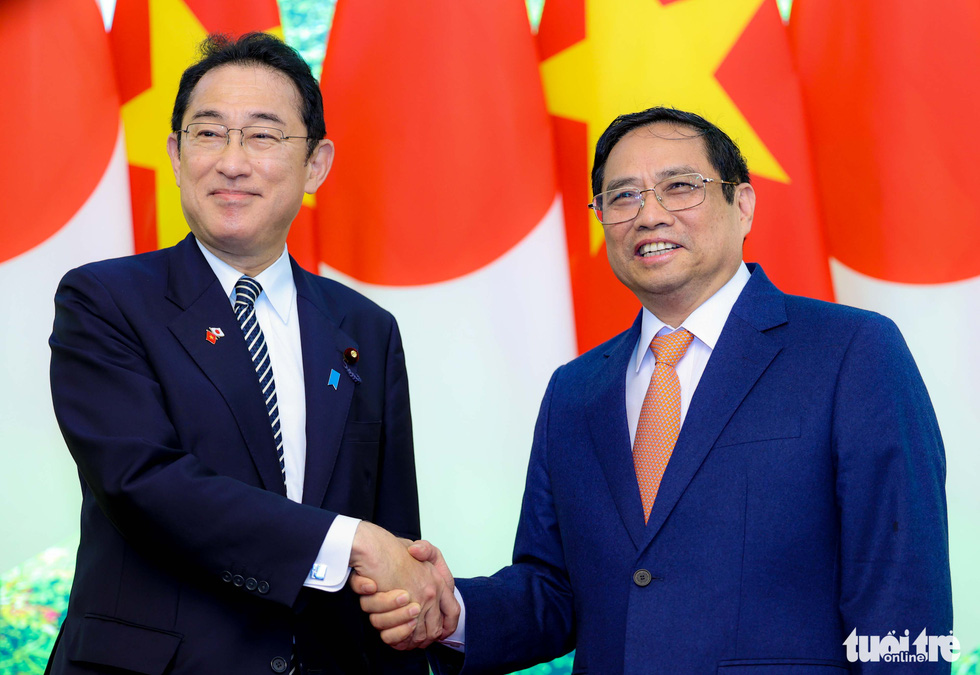 Vietnam’s Prime Minister Pham Minh Chinh hosted a welcome ceremony in Hanoi on Sunday morning for his Japanese counterpart Fumio Kishida, who is on a two-day official visit, aiming to boost an extended strategic partnership between the two countries.

PM Kishida, along with his entourage, arrived in Hanoi on Saturday afternoon, at the invitation of PM Chinh, who had an informal meeting with the Japanese guest right after his arrival.

At the meeting, Chinh briefed Kishida on Vietnamese culture and invited a calligraphic master to write three words ‘chan thanh’ (sincerity) ‘tinh cam’ (affection), and ‘tin cay’ (trust) in both Vietnamese and Japanese Kanji before presenting it to his guest, the Vietnam News Agency reported.

These words are the motto for the Vietnam-Japan ties that the two PMs had agreed upon during Chinh’s visit to Japan in November 2021.

Cultural similarities between the two nations have created a solid foundation for strengthening their friendship, Kishida said.

After the official reception hosted by Chinh for Kishida at the Presidential Palace on Sunday morning, the two government leaders planted a friendship tree in the compound of the Vietnamese government office before beginning their official talks.

They later witnessed the exchange of cooperation documents, met with the press, and participated in the Conference on Cooperation in Industrial Innovation and Digital Transformation.

Kishida’s visit, the first to Vietnam since he took office in October 2021, has taken place when the Vietnam-Japan extensive strategic partnership is developing fruitfully and both nations are looking forward to celebrating the 50th anniversary of their diplomatic ties in 2023.

The visit is aimed at further deepening Vietnam-Japan relations and promoting the implementation of the outcomes of the Vietnamese leader’s trip to Japan last year.

Specifically, it will help strengthen the two countries’ political trust and substantive cooperation in all fields as well as good relations between their senior leaders, meeting the interests and aspirations of the two peoples.

Kishida, who once came to Vietnam as foreign minister in 2016, said the Southeast Asian country is a place for which he has had a lot of affection.

Having maintained an extensive strategic partnership with Vietnam since 2014, Japan is the largest official development assistance (ODA) provider, the third-biggest tourism market, and the fourth-largest trade partner of the Southeast Asian country, according to national radio station Voice of Vietnam.

Bilateral trade last year reached US$42.7 billion, up 7.8 percent from 2020, and Japan has invested $64.4 billion in Vietnam, behind only South Korea and Singapore.