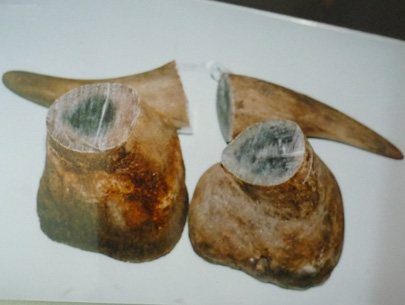 The passenger, N.D.D., 34, arrived in the airport on flight QR604 of Qatar Airlines on the evening of May 4.

After finding suspicions signs on the man’s suitcase, customs officers examined it and discovered the horns packed in silver wrapping and hidden among other items in the suitcase.

Yesterday the HCMC Customs Department handed the man and the rhino horns over to the Ministry of Public Security’s Department for Investigation of Economic Management and Position-Related Crimes for investigation. A similar case occurred at the airport in January, when police caught 33-year-old Ha Chan Chinh illegally transporting six rhino horns from Mozambique to Vietnam.

Chinh, who flew from Mozambique to Doha and Bangkok before arriving in Vietnam, had covered the horns with silver wrapping and hid them among the clothes in his luggage, police said. Police officers decided to examine Chinh’s luggage after noticing a stinking odor emitted by the horns, police said. Chinh, a resident of HCMC’s Go Vap District, confessed to investigators that he had trafficked the horns from Mozambique. The horns had been sawn off rhinos that had been shot dead in Africa, the man said.Import & Export Ban Rhino horns are among the goods that are banned from being imported to or exported from Vietnam. Recently, the Vietnamese Government issued a directive banning specimens of rhino and several other wild animals from being traded, exported or imported. Specifically, specimens of white and black rhinos and elephants, as well as products made from their horns, are banned. Any other animals included in the list of the appendices of the Convention on International Trade in Endangered Species of Wild Flora and Fauna (CITES) are also not to be traded. The CITES Management Authority Management regulates the international trade of endangered wildlife.

The specimens described above can only be imported under three circumstances.

First, the specimens serve diplomatic or scientific research purposes; are to be used for biodiversity conservation, to be displayed at a zoo, or exchanged amongst CITES authorities and its national members. Second, the specimens are non-commercial products that meet the import requirements set by CITES Vietnam and the CITES authority from the exporting country.

Finally, specimens that acquired CITES permission for import prior to the release of this directive reserve the rights to be brought to the country.