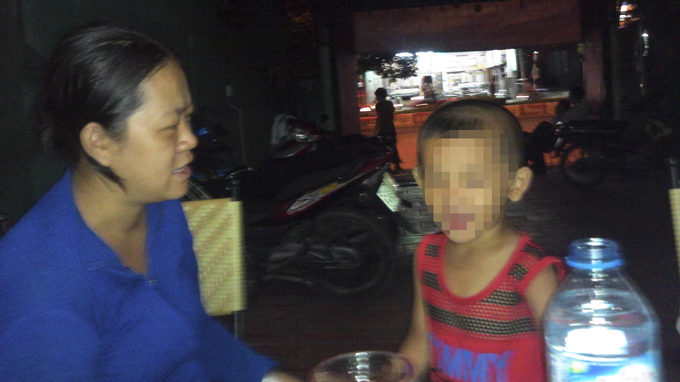 Buying and selling of children emerges in HCMC

There exists an alarming situation in which children, even newborn babies, are sold and bought illegally at different prices in Ho Chi Minh City, a Tuoi Tre investigation has found.

While accompanying a couple that wants to adopt a child and through the introduction of brokers, Tuoi Tre reporters met Thanh Tuyen, a 23-year-old woman from District 12 who was looking for people to whom she could sell a child. Tuyen asked the reporters to meet her on the evening of April 13 at a café near the Quang Trung flyover, where she offered to sell a 4 year-old boy she called her son for VND50 million (US$2,400). Tuyen said that a month before she “gave away” a little girl to a Vietnamese-American in Cu Chi District and received VND17 million in return. “My business method is ‘cash on delivery’,” Tuyen said. “When I contact authorities to make procedures related to boy, I will tell them that I am too poor to bring him up so I have to give him away to someone else. You must not say that you pay VND50 million or both you and me will be jailed at once.” Tuyen then showed the reporters a birth certificate bearing the name T.T.S. [the boy] , issued by Dong Hung Thuan Ward, District 12. On the paper, the name of the boy’s mother is Tran Thi Thanh Tuyen, residing in Dong Hung Thuan Ward. “I can obtain such certificates anywhere,” Tuyen told Tuoi Tre. “You must pay me VND45 million and take the boy, When I gave you all of the papers related to him, you pay me the remainder,” Tuyen said. In another case, Le Nguyen Chau, a 35-year-old father of three children and a native of Dong Nai Province, told Tuoi Tre he wanted to sell the youngest child, a 3-year-old girl, for VND50 million. “I will spend VND40 million of that on medical treatment for my wife and I will use the rest to buy a motorbike to make a living as a motorbike taxi driver,” Chau explained. Chau and his family are currently living in a rented house in Dong Hung Thuan Ward. Chau sold his daughter to a broker named Thu, who told Tuoi Tre that she had arranged for Chau and the person who needed to buy a girl to deal with each other at a café on Nguyen Van Qua Street.    “The girl’s name is Mong Giau [Dream of getting rich], but poverty continued to haunt my family,” Chau said, as an explanation for why he sold his daughter.Brokers at hospitals Around Hung Vuong Hospital , a obstetrics clinic in District 5,  Tuoi Tre has identified  many people who act as brokers for selling and buying newborns. On the afternoon of February 18 a man named Minh, 42, met with a woman named Nhung, in her forties, who wanted to buy a child. Minh left, and 30 minutes later he phoned Nhung, saying that he would sell her a 3-kg boy who had been born two days earlier. The two sides met and Minh said Nhung would have to pay him VND27 million if she bought the boy. Minh also said he had to pay a few others involved in the trade of the boy. On April 19, Nhung agreed to buy the boy and Minh said, “I have relations with the hospital so I can get a birth certificate for you. On the certificate, your name and other personal details will be shown as the mother of the boy. The man also said, “You simply pay VND7-10 million for the certificate and don’t fear arrest by the police.” Besides this hospital, brokers can be found at Tu Du, another obstetrics hospital, as well as in front of industrial parks or export processing zones in HCMC, where there are a large number of workers, including females. Lawyer Nguyen Van Hau, deputy chairman of the HCMC Lawyers’ Association, called for measures to prevent the trade of children, including newborns. Those who sell or buy children will be charged with “Trading in, fraudulently exchanging or appropriating children” under Article 120 of the Penal Code. Accordingly, offenders will be given a sentence ranging from three years to life imprisonment.