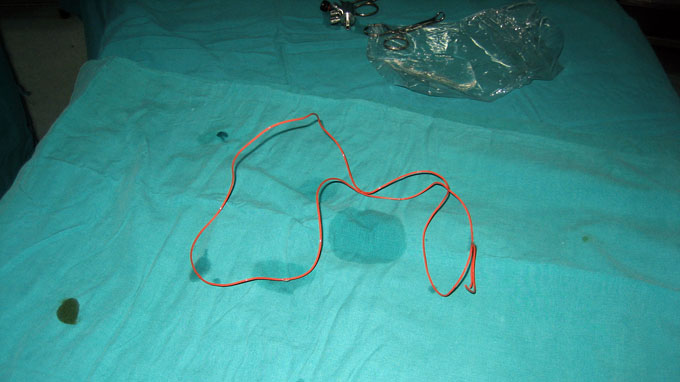 An electric wire that is nearly 1 meter long has been taken out from the bladder of a 15-year-old boy in Ho Chi Minh City. Surgical doctors at the Pediatrics Hospital 2 in HCMC used an endoscopic technique to remove the foreign body out of the bladder of the boy, N.T.P., who lives in Cu Chi District. Doctors found one tip of the wire protruding from the urethral meatus. P suffered from pains in the belly two days before he was hospitalized, his relatives said, adding that the boy admitted he had pushed the wire into his bladder through the urinary tract. Luckily, the wire did not form any knots after it entered the bladder, otherwise, the case would have been more complicated, said Dr. Pham Ngoc Thach, a pediatric urological surgeon, who directly treated P. If untreated, the boy would be infected in the bladder and urinary tract, and his kidneys would be damaged, the doctor said. P has recovered and will be discharged today. This is the first time the hospital has treated such a case, Dr. Thach said.  Foreign bodies are often found in the urinary tracts or vaginas of children, especially those at the age of 3, since children at such age undergo a rapid psychological change and tend to explore everything, including their bodies, the doctor warned. Meanwhile, older children like P (15 years old) normally do not do such things, he added.