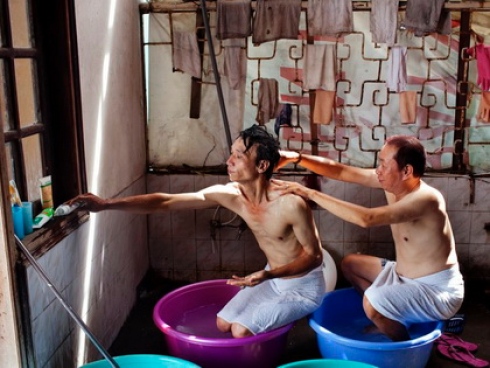 52% of homosexual-heterosexual marriages end in divorce

52% of marriages between homosexuals and heterosexuals in Vietnam end in divorce, the Institute for Studies of Society, Economy and Environment (iSEE) announced on May 14.

>> Watch the video about "My best gay friends" sitcom at our Media page, or scroll down for the on-page video.

Titled “Same-sex relationships in Vietnam,” the study was carried out with the participation of 2,500 people, 23% of whom were homosexuals, bisexuals, transgender and people of unknown gender from 2012 to early 2013.

According to the study, most homosexuals agree to marry heterosexuals due to pressure from their family, their wishes to have a marriage like other people, and to have children, or their filial duty. Half of the 52% who divorced said their marriages were unhappy, 17% said their partners did not accept that their wives/husbands are homosexuals, 21% were rejected by family members, and the rest divorced for some other reasons.

Though the homosexual couples involved in the study are young, they have had a long and stable relationship, especially between lesbian couples. 37% of lesbians in the study and 38% of homosexuals shared that their relationships have lasted from two to five years. Most of them have lived together to spiritually support each other with the hope of a long life together.

The study showed that none of the homosexual couples involved said they have asset disputes since they place a high priority on love. 28.9% of homosexual couples living together co-own valuable assets such as cars and bank accounts, 18.40% run a business together, and 7.9% have signed co-ownership agreements over their houses and properties.

Also according to the study, 61% of homosexuals and transgender of a marriageable age want to have children. However, the social stigma and legal impossibility are big challenges for them.

In addition, 63% of homosexuals taking part in the research shared that they have been discriminated against through vulgar language, disdain and physical abuse.

Vietnam has about 1.6 million homosexuals, bisexuals and transgender who are facing difficulties in identification, cohabitation, birth-giving and adoption, iSEE said early this month. 73% of the nation’s homosexuals live in Ho Chi Minh City and southern provinces.