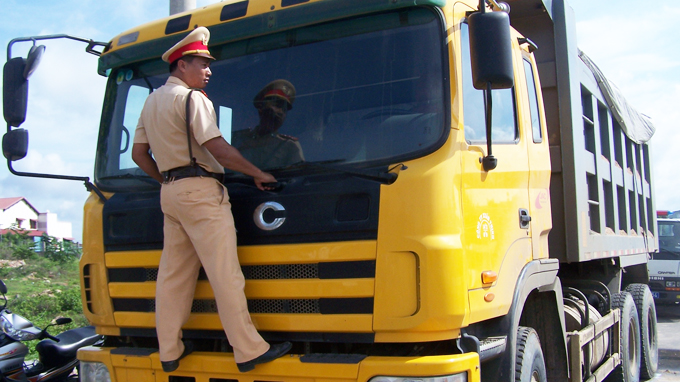 A traffic policeman in the central highlands province of Dak Lak clung to the windshield wipers of a moving truck after the driver tried to run into him.

At 8am on May 13, a traffic police team led by Lieutenant Colonel Nguyen Tang Trung saw sand, water, and mud spilling out of a truck into the street so he ordered the driver to pull over.

33-year-old Tran Dinh Bao, the driver, not only did not comply with the order but also deliberately drove the vehicle into Captain Huynh Minh Phuc.

To avoid the attack, the policeman grabbed the windshield wipers and repeatedly asked for help, as the truck was traveling at a high speed.

Police said Bao sped up, drove zigzagged, and twice deliberately drove his vehicle into electrical poles along the street with the intent to kill Phuc.

After one kilometer, Phuc climbed towards the cabin, trying to subdue the rouge driver, but Bao beat his leg with an iron piece.

Bao only “agreed” to stop when more police showed up.

In April, 2012 a Youtube video showed a Vietnamese traffic cop on a wild ride in Hanoi, holding on to the windshield wipers of a moving bus for nearly one kilometer after the driver tried to avoid a ticket. The driver was later arrested for acting against public officials.