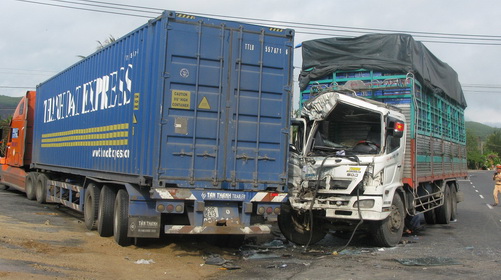 48,000 vehicles to be put under speed limit control

In an attempt to increase traffic safety and reduce traffic accidents, the National Traffic Safety Committee has said it will control the speed of 48,000 trucks and buses nationwide using an operation tracking software. The committee’s deputy chairman, Nguyen Hoang Hiep, revealed the plan in a recent interview with Tuoi Tre about the committee’s efforts to improve traffic safety.  Hiep said the software will be put through a trial beginning June 20 and if it runs well, it will be installed on about 48,000 trucks and buses across the country to control speed, Hiep said. When these vehicles are being driven, their movements, including speed, will be recorded by the software, which will then transmit the data to the committee’s database center, which will in turn handle the recorded information to identify which vehicles have violated speed limits, Hiep said.     Information about such violations will be transferred to the transport businesses whose drivers speed so that they can handle their employees, Hiep said. He added that the information will also be sent to the media to make it known to the public. The business license of any transporter who has more than 20 percent of their vehicles caught speeding will be revoked, Hiep warned. In mid-June, the Transport Ministry will issue a circular to guide the implementation of the regulation. Hiep also talked with Tuoi Tre about the committee’s response to the many deadly accidents that have occurred over the past several days. After the accident that killed seven people and injured 21 in Khanh Hoa province on June 7, Prime Minister Nguyen Tan Dung ordered concerned agencies to investigating the cause of the accident, including the committee, the Transport Ministry, and the Ministry of Public Security, Hiep said. Two days later, on June 9, three major accidents occurred within the day, killing three people and injured 30 others in Quang Nam Province; killing six in Ba Ria-Vung Tau; and injuring seven people in Tien Giang. The committee also continued working with other relevant agencies and authorities to investigate these incidents. As the number of traffic accidents has increased sharply since April, the committee has continue requesting that all means of transport, especially buses, strictly comply with regulations on transport and the Road Traffic Law, Hiep said. Most of the serious accidents have been caused by drivers who were speeding and in the wrong lane, Hiep added.