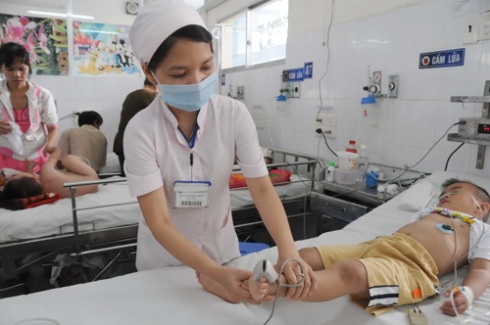 Two children have died of the hand, foot and month (HFMD) disease in southern Binh Phuoc Province over the first six months of 2013, with the second fatality recorded on Tuesday, local health authorities reported. Dr. To Duc Sinh, director of the provincial Preventive Health Center, yesterday reported that a two-year-old child, Nguyen Le Truc Phuong, in An Phu Commune, Hon Quan District, died of HFMD on June 29, after four days of treatment. Phuong was hospitalized on June 26 with high fever and month ulcers and was later diagnosed to have HFMD at level 4. Despite intensive treatment, the child’s condition got worse rapidly, leading to death, doctors said. The first death of HFMD occurred on January 4, when 5-year-old Nguyen Van Soi died in Dak Nhau Commune, Bu Dang District, Dr  Sinh said.  Recently, the number of HFMD patients has sharply increased in the province, with about 30 cases per week, Sinh said. In the first six months of this year, the province had 387 patients, up around 20 percent compared with the same period last year. The disease is characterized by fever and rash most frequently seen on the palms of the hands, soles of the feet, and inside the mouth. In Vietnam the most common strain is Enterovirus 71 (EV-71), which causes sores in the mouth and blisters on the hands and feet. The Health Ministry has recently released the following warnings: the disease can be transmitted though digestive tracts; there are no vaccines or specific medicines to combat the disease; children under five years old are most vulnerable; and the main preventive measures are following hygienic practices in eating, drinking and living.