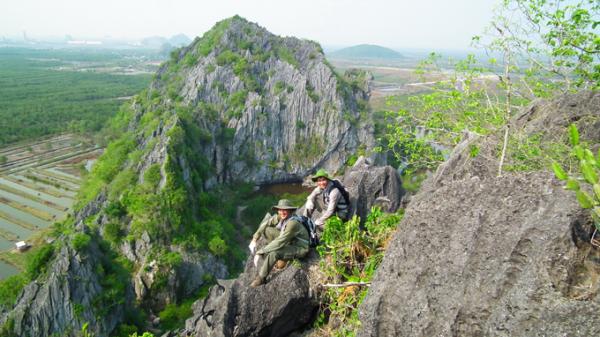 In response to a proposal by a company that wants to build a road on the limestone Ba Tai Mountain in s Kien Giang Province, a scientist has voiced his concerns about potential consequences.  Huong Hai Co Ltd, a mineral company, wants to set up a road across the mountain to create access to its plant. Provincial authorities have approved the proposal, but Dr Luu Hong Truong, from the Southern Ecological Institute under the Vietnam Academy of Science and Technology, warned that the mountain should not be divided.     Ba Tai Mountain is located in An Binh Commune, Kien Luong District. It has two peaks with a height of up to 104 meters. Given that Ba Tai’s highly diverse ecosystem has not yet been damaged by human activity, scientists consider it an integral part of the national heritage of biological diversity. Therefore, the mountain is one place where all mineral exploitation activities are banned. If a road is built across the mountain, such work will cause at least five serious impacts, Dr Truong said. Firstly, the beautiful landscape of the mountain will be undermined, and even destroyed. The road will divide the mountain into two parts, affecting the integrity of the landscape that makes the mountain attractive to tourists. Secondly, the road will disrupt the ecological system of the mountain. The lives of many fauna and flora systems on the mountain will be damaged by dust, smoke, noise and other negative factors caused by vehicles using the road and other human activities. Thirdly, the road will also divide certain animal populations living on the mountain, affecting their communication, contact and exchange and thereby causing negative impacts on their reproduction and genetic structural balance. In the long run, these populations will lose their genetic diversity and small animal populations may face extinction. Fourthly, the mountain will suffer greatly from this loss of biological diversity and extinction of a number of species. Finally, the building of such a road will affect the conservation plan for the endangered Indochina silver langur (Trachypithecus germaini), which is classified as EN in the World Red List. Under the plan, Ba Tai is seen as a convenient place for the relocation and conservation of the silver langur, which has been displaced by mineral exploitation at limestone mountains. On June 25, Tran Hong Hai, deputy chairman of Kien Luong District People’s Committee, told Tuoi Tre that Huong Hai Co Ltd’s propsal to build a road across the mountain has been approved by both the provincial Transport Department and People’s Committee. The district authorities are working with the road’s investor to determine its boundaries, Hai said.Tuoi Tre also contacted Nguyen Xuan Loc, director of the provincial Department of Natural Resources and Environment, about the issue, but Loc said he could not give an opinion since road building belongs to the authority of the Transport Department.