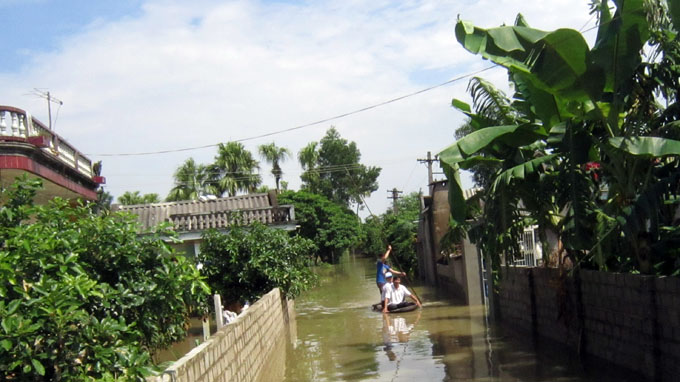 The tropical storm Usagi, which has been labeled a super typhoon, did not make landfall in Vietnam but was close enough to bring heavy rainfall and cause flooding in several localities in the country.

Tran Van Tuan, chairman of the People Committee of Nong Cong district in Thanh Hoa central province, on Saturday said that heavy rains and upstream floodwaters over the last days have severely submerged many localities.

As of Sept 21 afternoon, 297 homes in Nong Cong were inundated and a 4-year-old child in Ken village in Tuong Son commune drowned, he said.

On the same day, heavy rains accompanied by whirlwinds caused 24 homes in Hon Dat district in the Mekong Delta province of Kien Giang to collapse.

On the early morning of Sept. 21, some large trees at Ho Chi Minh City-based 30-4 Park fell down under the influence of heavy rains accompanied by strong winds.

Packing sustained winds of 224kph, the storm, which meteorologists say is the most powerful this year, battered the northern Philippine island of Luzon while striking Taiwan on Saturday.

According to CBC, the typhoon triggered landslides and floods, uprooted trees, and damaged houses, roads and bridges in parts of the northern and central Philippines.

CBC quoted the Office of Civil Defense in the Philippines on Saturday that at least two people were killed and two others were missing. It said that a 50-year-old man and a 20-year-old woman drowned when a passenger boat capsized in rough waters off northeastern Aurora province.

In Taiwan, more than 3,000 people were evacuated from flood-prone areas and mountainous regions as the government deployed military personnel into potential disaster zones, CBC said.

After lashing the Philippines and Taiwan, Usagi is moving towards southern China and China’s National Meteorological Center issued a red alert — the highest-level warning with the storm. The storm is forecast to make landfall in Hong Kong on Sunday night.