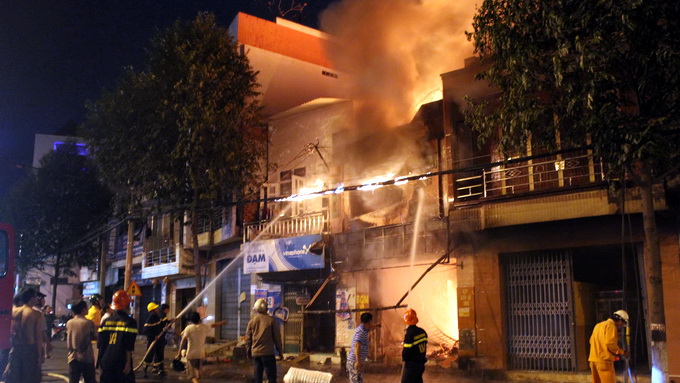 A fire raged through a motorbike saddle cover shop in southern Vietnam and killed at least five people, including one child, on Sunday.

A Tuoi Tre journalist reported from the scene said that the fire erupted at 7:00 pm at the Phong Phu shop in Bien Hoa City, Dong Nai Province.

The blaze quickly blanketed the two-story house and licked two nearby ones because flammable materials like leather, fabric, and sponge were stored inside.

The journalist saw at least five bodies of four adults and one child were carried out of the shop.

Witnesses said the fire broke out on the first floor and spread so fast that many people could not get out.

Firefighters managed to contain the flame at 10:30 pm. Local authorities are investigating the cause of the fire and still looking for more victims feared to be trapped inside the shop.

A group of Bien Hoa police officers have been dispatched to a provincial hospital where the badly burned bodies are kept to get the DNA of the victims for finding out their identities.

Below are some photos of the fire scene taken by the Tuoi Tre reporter: