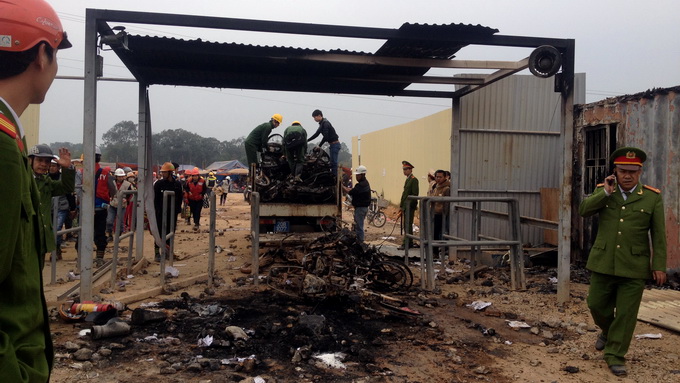 11 people were injured in clashes between workers and security guards at the under-construction Samsung complex in northern Vietnam’s Thai Nguyen province on Thursday morning.

At around 7am, a local worker was not allowed to enter the construction site because he turned up late, according to eyewitnesses.

Some security guards hit him with a bludgeon, causing him to fall unconscious as the latter ignored their request.

Bloody violence erupted as relatives of the attacked worker and other enraged workers clashed with the guards.

Three containers and more than 20 motorbikes were burnt down during the clashes.

Among the 11 injured, one has been discharged while others are still being treated at Thai Nguyen military hospital. Police officer(s) is among the injured.

Journalists were banned from attending a press conference organized by local police on Thursday afternoon.

After the conference, Duong Ngoc Long, chairman of Thai Nguyen’s People’s Committee, confirmed with Tuoi Tre that no one was killed during the incident and there were only 11 injured people.