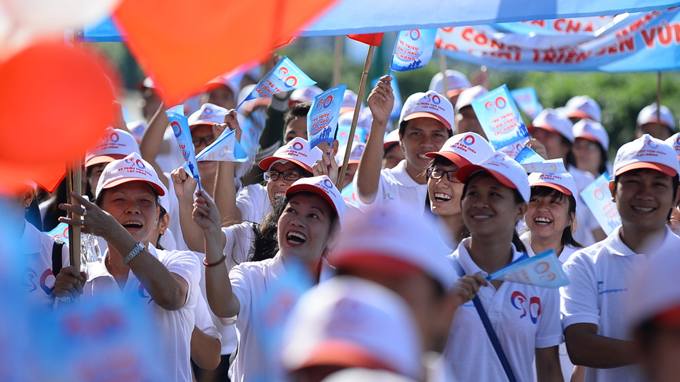 A Vietnamese professor at a Japanese university has warned that Vietnam may miss the opportunity to become a wealthy country even though it is now in a demographic bonus period. Prof Tran Van Tho, of Japan’s Waseda University, said in a recent article written for Tuoi Tre that the Southeast Asian nation will face the challenge of its population getting old before it manages to become rich. This is a plausible scenario if the country fails to take advantage of the precious period in which the number of working-age people reaches its maximum, Prof Tho said.  Changes in the population structure of a country usually come in four stages, he added. In the first one, both birth and death rates are high, so the population does not expand, or may increase only very slowly. In the next, death rates tend to decline, while birth ratios continue to rise, leading to a rapid rise in the population. This stage is characterized by a very high proportion of young people, often under 15.    In the third stage, birth rates shrink and the population goes up slightly. Those who were born in stage 2 now become the workforce.

Working-age people reach their peak number in this phase, while the portion of dependants is small, as young people (0-14 years old) occupy a limited share in the population structure and the number of elderly people (over 65 years of age) is not yet high. This is an ideal period for economic growth, so it is called a “demographic gift,” “demographic bonus,” or “demographic devidend.”  In the last stage, the demographic bonus period ends and the population begins aging, with the propotion of the elderly soaring and a gradual decrease in the number of working-age people. A welfare burden also comes into being in this stage, because the size of the dependant group grows, the scholar noted. A proper way to move a country forward would therefore be preparing all the necessary conditions for strong development in stage 3, he suggested. Such conditions include universal basic education, infrastructure development, and an effective legal framework. Full employment should be carried out at this point, Prof Tho advised, elaborating that all available labor resources should be used in the most efficient way possible. The above term represents the highest amount of skilled and unskilled labor that could be employed within an economy at any given time. The third stage, informally known as the “golden population” period in Vietnam, is relatively long, lasting for 50 years, between 1970 and 2020. The academic said that it is advisable for a country to promote education, advance science and technology in order to maximize productivity, and re-align economic structures to maintain growth before it enters stage 4, when the population ages.“Golden population” period will end very soon Vietnam’s population reached 90 million in early November 2013, making it the world’s 13th most populous country. The United Nations has forecast that its population will rise to 100 million by 2030, and 105 million ten years later, before it plunges. The country’s working-age population began to rise around 1970, when its proportion was 51 percent. The rate is expected to surge to 71 percent in 2020. Similarly, the number of dependants started dropping in 1970, and is predicted to drop to the minimun in 2020, prior to an expected rise again in the middle of that year. So Vietnam’s “golden population” era began in 1970, and will likely come to an end in 2020, according to Prof Tho. Most of the period, however, has already elapsed, with the country failing to make the best use of it for economic growth, partly because of the war during 1970-1975, while the “Doi Moi” (Renovation) policy was not adopted until ten years later. In the first ten years of Doi Moi – a set of reforms implemented to spur  the Vietnamese economy initiated in 1986 – apart from resuming agricultural production, the country simply embarked on the building of foundations for a market economy and international integration, the expert pointed out. Between 1995 and 2005, the Vietnamese economy grew 7-8 percent a year, still lower than the 9-10 percent average of other Asian countries in their respective demographic dividend periods. Vietnam’s annual GDP expansion fell to about 5.5 percent because of low economic efficiency and unstable microeconomic conditions from 2006 to 2013, the professor said. The time gap between Vietnam’s demographic dividend period and those of China, South Korea and Thailand is not too wide – about 10 years (see Table 1), but the issue here is that the development level of Vietnam in its “golden population” period is lower than that of each of the other three countries during their own periods. As shown in Table 2, Vietnam’s GDP per capita estimated in the year when its demographic dividend period ends is also far below that of Japan, China, South Korea and Thailand when their corresponding phases conclude.

Notes: * Table 2 was prepared using statistics by the World Bank and calculations by Prof Tran Van Tho. * GDP per capita figures were calculated in USD in accordance with the 2005 prices, those in parentheses have been converted to the prices of the corresponding years.Risks & solutions Vietnam is currently altering its growth model and restructuring its economy, while there are almost seven years left of its “golden population” structure. Thus it is facing a great challenge: its population will have already aged, while it has yet to reach the expected level of development. Overcoming this challenge requires massive efforts from those who are supposed to be responsible for the country’s socio-economic growth. The only way now is to reform institutions comprehensively to better mobilize resources like capital, land and labor, and effectively use them to speed up sustainable development. The country should rapidly and thoroughly implement the policies of reforming and restructuring its growth model, state-owned enterprises, and the banking system.       Three other important issues must be addressed at the same time, including land ownership and agricultural and rural development; corruption; and the quality of education, science and technology. Prof Tho remarked that Vietnam is a rarity as a nation since it has a big population together with great cultural and language uniformity. It will become a powerful country if good institutions and a sound development strategy are both put in place, he said.