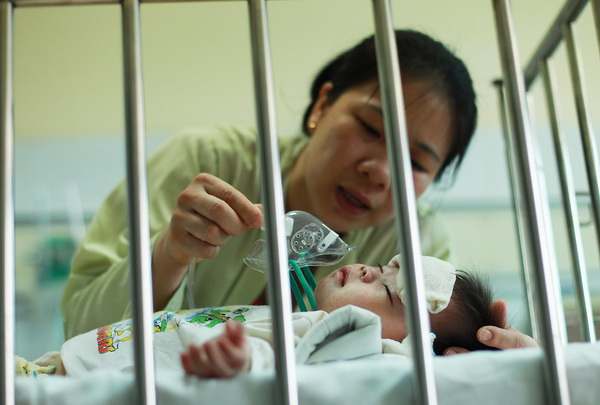 As the number of children hospitalized for measles has increased sharply in Ho Chi Minh City, local health authorities have called for efforts to prevent the disease.

>> Measles spreads in Hanoi, with dozens of kids affected per day>> Measles recurs after 2 years, killing two children According to statistics of the Tropical Diseases Hospital, only 14 children were hospitalized for measles in two years 2011 and 2012, and during the first 10 months of 2013, the number of hospitalization cases was only two. However, over the last two months of 2013, as many as 48 children were taken to the hospital for measles, and from the beginning of this year to February 7, the hospital received 72 children with measles. The same situation was seen in Pediatrics Hospital 2, where 49 children were treated for the disease from January 1 to February 6. The figure is much higher than the total of 23 children with measles recorded over the two years of 2012 and 2013. Dr Truong Huu Khanh, head of the Infection Department at  Pediatrics Hospital 1, also said the hospital has received 4-6 children per day on average from the beginning of the year. Most of the children taken to the hospital for measles had yet to be vaccinated or had received only the first shot, Dr Khanh said.

He also said six children who suffered pneumonia as a complication of measles were put on respirators. According to the HCMC Preventive Health Center, most of children with measles are under three years old and the disease has been recorded across the city. With an aim to prevent the spread of measles, the center has asked its units in all the 24 districts of the city to take effective measures to cope with the disease. All children aged 9 months to three years old must be vaccinated against measles, the center said, adding that children with high fever, continuous coughing, runny nose, and rashes on their bodies should be taken to hospital for examination immediately. According to the Preventive Health Department under the Ministry of Health, Hanoi and northern Lao Cai, Son La, and Yen Bai provinces have also been affected by measles since early this year. It is worth noting that even children who were vaccinated against measles have contracted the disease, said Tran Dac Phu, head of the Preventive Health Department.

Explaining the situation, Phu said the vaccine only prevents 80-90 percent of vaccinated children from becoming infected with measles.