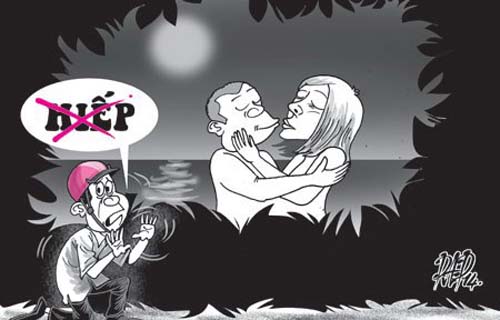 Police refute French tourist’s accusation of being raped by Vietnamese

Police in central Vietnam have just disproved a rape allegation against a Vietnamese DJ by a French woman, saying what he had done in October last year was not an assault, thanks to descriptions by a voyeuristic motorbike taxi driver, a Ho Chi Minh City newspaper reported Thursday.

The police in Binh Thuan Province have concluded that T.N.H., 32, did not rape BB Danielle, a 32-year-old French tourist, on October 20 following accounts by an eyewitness, scene investigations, and an inspection of the woman’s body, according to the Phap Luat TPHCM (Ho Chi Minh City Law) newspaper.

They have thus decided to scrap any further probe into the case in which Danielle had demanded US$10,000 in compensation from H.

The Binh Thuan police had earlier questioned a motorbike taxi driver who took H. and Danielle from a club to the former’s hotel in Mui Ne, a famous resort town in the province, given the woman’s accusation that the man raped her on a beach in the small hours of October 20.

The driver witnessed H. following Danielle to the beach after he carried them from the nightclub to the man’s hotel, according to his testimony.

He then saw H. going naked in the sea with Danielle in a bikini while the driver was waiting close by in hopes the two would ask for another ride after he had streamed around but found no other customers.

The driver secretly hid behind a bush to watch the expected intimate scenes and even went to find some colleagues to enjoy them with him when the two were wildly caressing each other.

But he could find no companion so the driver returned to watch alone the two people now fondling their bodies emotionally on the sand.

“I could see the satisfied face of the woman since I was very close to them,” the driver said. “When they were about to have sex, some fishermen suddenly arrived at the beach on their basket boats so the two stood up and left the place.

“I also went away because I was afraid someone would see me.”

Police documents show that Danielle came to Mui Ne as a tourist and stayed at a guesthouse there.

Danielle met H., who went to the town to organize a contest for rising disc jockeys, at a club at 1:00 am on October 20, according to the documents.

They made friends with each other and then walked together around a nearby beach for 15 minutes before getting back to the club for a drink.

H. called a motorbike taxi to take them to his hotel at 4:00 am when Danielle was too drunk to remember either the address or the name of her guesthouse.

The French woman refused to get inside the hotel but walked alone to the beach in the front instead.

She told the police that H. followed her and abruptly hit her on the neck, causing Danielle to scratch herself on a seafront embankment.

H. moved on to tear her clothes up, throwing them into the sea, and forcing her to have sex, Danielle said, adding she fought back but then pretended to ask him to do it in his hotel room.

“When he was putting on his clothes, I dashed to grasp a tarpaulin from a basket boat and wrap it around my body before running to a police station,” she said.

Clothes swept away by waves: accused

But H. rebutted Danielle’s statements, saying she was so drunk that she slipped over the embankment and caused herself the scratches.

They walked to the beach, voluntarily shed their clothes, and kissed each other by the sea, H. told the police.

“She got angry and left me as I hurt her,” he said. “I ran after her, grasping her hands, and dragging her back to bathe in the sea again.”

When the sea became rougher the duo returned to lie on the beach where Danielle asked him for sex, according to H.

“She changed her mind and requested me to do it in my hotel room when she knew that I did not bring a condom with me,” he said. “I was turned off this way so I put on my clothes and we parted.”

Danielle’s clothes were swept away by sea waves so she went to get a tarpaulin from a nearby basket boat to cover her body, the man said.

The Binh Thuan police are now waiting for the ratification of their conclusion by the local procuracy.

* The French woman’s name has been changed due to the sensitivity of the matter.