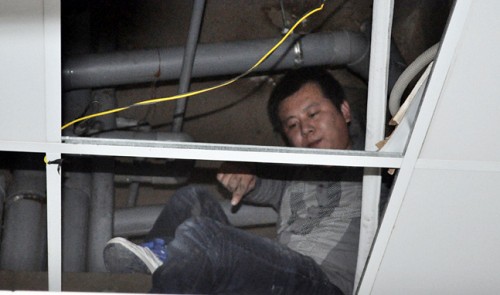 Health inspectors in Ho Chi Minh City have caught a Chinese doctor working illegally at a clinic, which also violated regulations on medical examination and treatment – the latest in a series of such cases that have been uncovered in the city over the past time. A HCMC Health Department team of inspectors found four Chinese doctors working at Elizabeth General Clinic in Ward 14, District 10, one of whom failed to present a practitioner’s certificate, during their inspection there on Tuesday.  The clinic was discovered offering the following medical services: HBV and HIV testing, semen analysis, gynecologic ultrasonography, cervix endoscopy, circumcision, and some others. A few of these are not included in the clinic’s license, the inspectors said, adding patient records were kept improperly at the facility. The clinic had ads published on a website but failed to show documents that justify them, the health officials said.  During the inspection, some employees of the clinic even forced reporters to get out and prevented them from taking photos or shooting videos. The inspectors have made a report on the case, temporarily seized 29 medical books and 33 sheets of test requesting forms for investigation. The team requested that the clinic only provide services stated in its license, stop all their violations, and present documents supporting the current use of its medical equipment. In fact, such violations at clinics that employ Chinese doctors, some of whom are unlicensed, are not new since many similar cases have been discovered in the city over the past few months. Inspectors found Chinese nationals wearing doctors’ blouses and examining patients with no interpreters at Hiep Hoa General Clinic on Truong Son Street in Tan Binh District, on May 7 last year.

Only one of the eight Chinese “doctors” and health workers had a practitioner’s license.

Moreover, the clinic was caught offering unauthorized services to patients, such as hemorrhoids and circumcision surgery.

The inspectors asked that the clinic suspend operations, pending investigation, and submit to the Health Department the identification and qualification papers of the Chinese health workers they employed. In October 2013, the city Health Department suspended the operations of Chau A General Clinic in District 5 after finding it hiring five unlicensed Chinese doctors and committing many other violations.