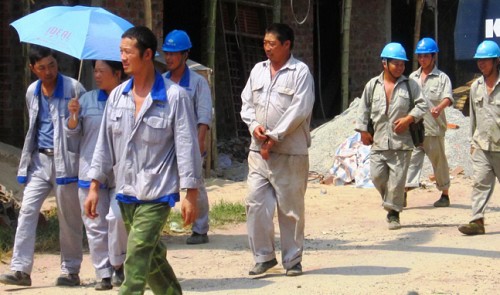 Almost 500 foreign workers, mostly Chinese, have been discovered working without a work permit for a state electricity center in a southern province. The state-owned Power Generation Corporation said Tuesday in a report that the number of foreign workers engaging in projects belonging to its subsidiary Duyen Hai Electricity Center, located in the Mekong Delta province of Tra Vinh, now stands at 1,026 people. A total of 552 workers have obtained work permits while 469, most of whom are Chinese, have yet to be licensed. The remaining five are exempt from such a permit.   An inspection team from the provincial Department of Labor, War Invalids, and Social Affairs requested on Monday that the center submit a report on the employment of foreign workers without work permits. The center is required not to allow these workers continue to work at its projects from Thursday onward if there is no written approval of the department and the provincial People’s Committee, the team said. The inspectors also demanded that the contractors of the projects owned by the center complete all necessary procedures to apply for work permits for their foreign workers within the next two months.