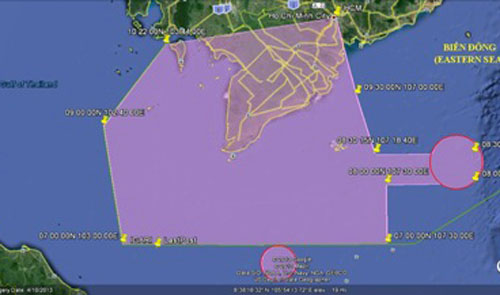 Vietnam received a request from Taiwan to be granted permission to send four ships and a plane to Vietnam’s sea waters to help search the Malaysia’s missing plane, reported Nguyen Ngoc Son, the spokesman of the National Rescue Committee, Friday evening.

The proposal was sent to competent authorities of Vietnam, added the lieutenant colonel.

At 9:20 (Vietnamese time), the rescue plane AN-26 of Vietnam discovered a yellow streak of around 20km long on the East Sea, 25 nautical miles southwest of Ca Mau cape. The information was sent to local authorities for verification. The streak locates at 8.13N – 104.34E.

Currently, Vietnam dispatches five rescue planes and seven ships searching for the plane with 239 people on board. The aircraft has been missing since March 8. So far, Vietnam has mobilized a total of 14 planes to search an area of 196,000 square kilometers on the East Sea in the past days.

On Friday, Vietnam reported it allowed five planes including two from China, two from Singapore, and one from Japan; and a cruiser of the US to enter the sea waters of Vietnam for the searching job.

Vietnam has also expanded the searching area to its coastal mangrove forest but no trace has been found.